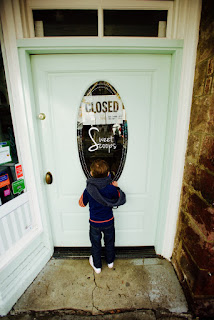 I was originally not going to post this, but after removing a sentence or two I've decided that it works, based on a crowd-sourced opinion of it. It felt a little bit "wrong" at the time. It did not adequately reflect the pride that I felt, as did Rhys' mother, at him being able to participate in the march with her.

Have it your way. Enjoy, or hate me:

Yesterday, after a hotel breakfast made from the finest heated fats on the earth, the boy and I packed up and headed home, cutting our northern adventure a little bit short. After explaining that there was going to be a group of people protesting in Sonoma Square, the boy decided that he also wanted to protest. I described, or tried to, what opportunities are, and how governments can function to prevent access to those opportunities in very subtle or overt ways, ways that white people claim to not understand.

No, everything but the last part. I offered that there were people marching for women's rights, and that Mommy is in fact a woman. That's all it took. He was all in, a tender revolutionary, ready to either hug out our differences or to oust the new president. We stocked up on ammo and headed down to see the fracas, hoping the cops would kick the remaining wits out of a few hippies showing their suspicion of the ob-gyn community.

Keep in mind that we're just south of UC Davis, where library sidewalks are washed with the tears of enemy infidels: students, sympathizers with education, burdening our great society with their educational loans.

Trump practically rose to power on this fine mist of pepper spray. 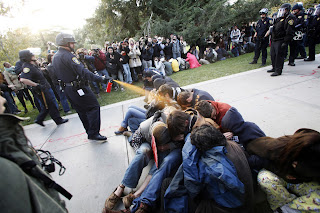 The "ammo" I brought was a charged camera battery and the largest memory card that CS has yet to steal from me. I wanted to shoot the event with an eye towards journalistic photography. I reminded myself not to interfere, that I am a spectator here. Within the hour I became wrapped up in the rhetoric of pussy protest. It was everywhere. I became willing to offer my wisdom, a man's true wisdom, on any and all matters pertaining to pussy (and how not to get some). I was prepared to praise the Great Pussy in the Sky, squirting down its presidential bounty.

I only referred to the earth as Father Testicle once.

I probably should not have gotten high for something like this, but I have my medical marijuana card, so any criticisms you have are no different than when Trump mocked the disabled reporter. To question my medical need is at least the same, or possibly worse, than that.

In truth, I was moved by all of the people marching and I was very happy for Rhys to see it and participate in it. Though, he became bored with unarmed insurrections rather quickly, so he and I went and hunted ice cream. He did seem to grasp that all of the people were there because they believe in the concept of equality. Or, I hope that he did, anyway.

He was happy to see Mommy.  Of that much I am certain. 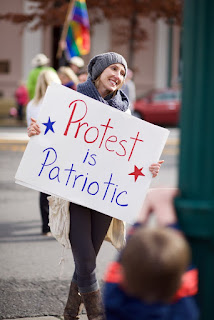 I kept the usual criticisms of feminists and feminism to myself and was able to support the basic premise - that everybody should be treated equally under the law, that opportunities in education and employment should not favor any one group over another. That is a principle that is easy to agree with. In fact, it's nearly impossible to disagree with, unless you embrace the thought and language of pathetic assholism. Principles are great, it's people that ruin things. Those self-described feminists that use half-grasped concepts of the movement only to berate suckers with broad accusations of sexism. It is why I often self-define as a woman, to avoid the boredom of being anyone's oppressor.

As we marched along, I thought.... who knows, maybe I can find a weak-willed feminist here that's willing to grant me some clemency. One simple mistake by a feminist and I could be back in the dating game.

It was easy to criticize feminism when it seemed like Hillary was going to win and that half the work force was willing to work for a fraction of the pay men get, but it's so much more difficult to feel good about all of it now. Maybe I should just try supporting causes without ever talking to anybody about them. I know that it seems counter to the purpose, but people are insufferable, they ruin everything. Just look at what I can do to a subject.

I opted not to discuss the successes and failures of Hillary for the entirety of my time there. Nobody mentioned her at all, in fact, nobody wanted to talk about it, even when I started screaming: YOU'RE WITH HER! and LOCK THEM UP!!!

I did scream, TRUMP'S A FUCKING STUPID CUNT! a few times. I was hoping I could start a sort of grassroots protest within the protest, but I failed. Nobody could get onboard with my attempts at gender insult irony.

I got a few giggles out of demanding MATRIARCHY NOW! though nobody would lock eyes with me in solidarity. I probably should have shaved for the event. I was there only to help eradicate gender, or concepts of gender. Which, if followed to its conclusion should also end the protest march. Who cares... I was out there being brave, like my girl, Caitlyn. If only men had not created these constructs of gender roles from which to celebrate and resist...

Times are tough for clarity. I was there to help them take back control of the means of reproduction. The Marxist in me grasped this important fact: women must share ownership of the uterus.

One local woman was so old she appeared to just be an apparition once made of dust. She hobbled by, looked at me and said, Fuck Trump!

I know! I said, Why do you suppose white women did this to all of us?

As we all marched peacefully along I asked some of the people around me if they really thought there was a chance that congress would repeal prohibition. We all wish to live in a post-prohibition society. This is the real danger, and why dads never ask moms what they think in front of the kids.

Jesus, this is not what I had hoped to write today. I have lost the ability to even feign seriousness. None of what I have relayed here is true, or very little anyway. The boy did want ice cream.

Feminism is succeeding on terms that nobody can quite agree on. They have accepted the idea that patriarchal societies have defined them poorly, now we need to acknowledge those definitions so that feminists can obliterate them. Then, and only then, will there be nothing left to demand. You'll know the time has arrived when there's nothing left to discuss.

It is important for the boy to understand why people were jaywalking in the streets, a thing that I was a bit unsure of also. I need to educate myself on what Trump has done in his first day on vacation. I'm reasonably aware of what he will do - appoint a judge to the SCOTUS that will help repeal Roe vs. Wade being a big concern. Changes in insurance that will treat pregnancy as something other than a health issue, a proposition that is as absurd and self-defeating for society as any that I have ever heard.

Do not think that because I am confused by the spectrum of contradictory claims found in feminism that I am blind to the odious means of some monstrous men. Far from it. I am on the side of the oppressed, whether they want me or not.