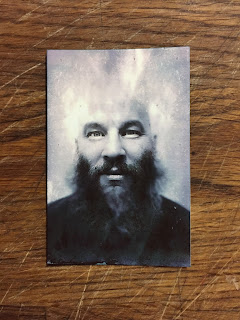 I love seeing these images in different contexts - taking pictures from one camera, printing them from the little toy printer, re-taking them as a photograph of a photograph (framed by a cutting board), pasting them to the refrigerator, hiding them in closets and cars, sending the images of the images via text. I am bluntly approximating one of the experiences of editing and of sharing, though with a different engagement in process. It is more physical, more Zen, and better because of it. The way that being outside is better than being inside for almost any joy felt. The open air of stimuli seems to authenticate certain emotions, taking the amorphous and validating it, setting it in time and place, adjusting the heart gently to the contours of the universe. All of that.

I am tickled by printing images, of watching them emerge from the camera and printer with the boy, having the return of instant photography in my life. I have conquered and reclaimed a good memory from childhood. Nearly everything about photography has become fun again, just like that. I had noticed that it was becoming an increasingly insular activity, but what the hell, everything is insulated and contained exclusively by the self, eventually. If dying isn't such a selfish act, then why should living by one's own choice be. Existence arrives as a type of debt, one that I find myself increasingly unwilling to pay, unless I trick myself into enjoying it where the debt seems to disappear, leaving life less lonely by just a little bit.

I hadn't quite realized how badly I needed something to come along, to stir me back into doing. Arriving at the cold and gray of winter was getting to be a bit much for me. It's partially why I agreed to compete in the Napa Olympics. I was so focused on sustaining the life that I was living that I forgot to put events around me, in front of me.

Us, I should say.

So, now there are instant film and printed pics lying on the desks and tables around the place, stuck to the walls in secret places. I have brought some odd enchantment into my life, some Romantic tickle towards travel and experience. The capturing of events has become its own event.

I should shift my focus from things to the reason to use and have those things. I've started playing the guitar in bed before going to sleep, when the boy isn't here. There is something that stirs some saved sense of youthfulness by playing in the dark. I have been finding my way back through some of the verses of the three chord folk songs that I know, with an occasional five chord Bowie or Stones track thrown in, to offset any silly feelings that I might have, of wanting anything more than escape. Sometimes the best and only escape is to live in the simple moment that is happening, and only try to guide it so much as to play the right chords and remember most of the lyrics. The singing comes and goes.


I accidentally locked my keys in my gym locker yesterday. I jogged home and recovered the spare to my house, found the duplicate, then stopped back by the gym later with the boy to open the locker and get my normal set back. We ran in quickly to recover them. The boy is fascinated with the gym and wanted to see how much he weighs now, around 50 pounds. The old balance scale was misleading on the lower register, between the heavier lead settings of 50 and 100.

When I opened the locker he peered in to inspect my dry t-shirts and towels, looking underneath for my keys, he suggested that I put a picture up there on the door. He said that would be a good spot for one. Right away, I agreed. When we went home, I let him pick out the picture that he wanted me to put in the locker. It nearly broke my heart with the naked sweetness of his choice. The boy is nothing if not sincere in his love. He turns five when he wakes up here in a few hours. As happy as any boy ever was. Younger than this site, often twice as nice. 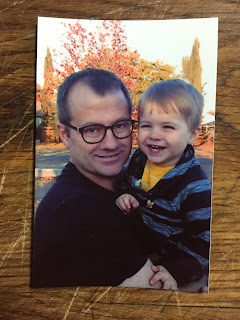