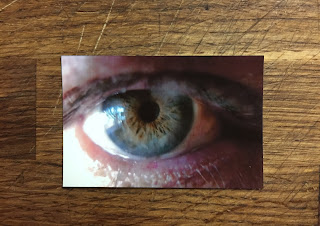 I need more space, on every computer that I use and within my living arrangement, or maybe elsewhere, somewhere. A friend offered me an enlarger but I lacked the necessary space that I could convert into a darkroom. That is the way of things. CS used to throw warehouse parties to transfer his image of evil to the physical world. That's what I want now, a place away from home to take and print pictures, to write and to read, to listen to music again, and a tremendous amount of time to do so.

I like that the eye above is not centered. It does something to the image that bothers me. Not in the obsessive-compulsive way, but perhaps more primal than that. It draws the eye and mind down and to the left, going against the rhythm of reading that the eye is accustomed to. It seems slightly threatening. The ashen eye of Eckleburg. The novelty of printing has taken me. I may do a series on the cyclops roaming freely amongst us.

Tomorrow is the boy's 5th birthday. There will be a party at a place where kids can jump around on bouncy things and gobble cupcakes. He will be getting a new bike, though he doesn't know that yet. He might suspect it. I had built up the Santa-bike-myth a bit before deciding that the birthday was a better time for it. Sort of, mom helped guide that decision, as she do.

Fuck, I've been sitting here trying to write for about an hour. I have let myself open about three different chats with people, with subjects ranging anywhere from Chinese prisons, to Casanova, to the joys of cycling, and of course small-print photography. Micro-images.

There is much talk about micro-aggressions, and of course they are real and should be annihilated from language by the few remaining correction volunteers, but I saw an article a few weeks back - or rather I should say that I saw a headline and the first paragraph of an article - that described "micro-cheating" and how to recognize if somebody was doing it. There are both male and female versions of the same article, it seems (I just looked). It turns out that I have been guilty of a bit of micro-cheating. I may soon be forced to restore my honor with micro-faithfulness and minuscule fidelity.

I am focused on the micro-world for what should be the most obvious of reasons, the macro world is being handled in the most macro of ways by the others.

Have you ever heard someone say that "Violence doesn't solve anything"? I wonder if that remains true for the people who say it, because it doesn't seem to not solve things for the true believers in it. A mob of people are now hoping to see their version of honor restored to America. I suspect that some very, very bad things might be the result. 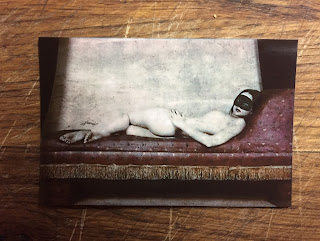