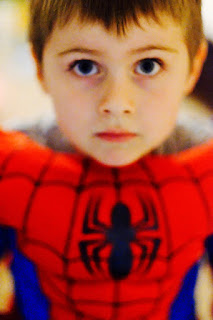 I wrote a post early this morning and almost published it. I was in bed when I heard the boy's bedroom door open. I thought that maybe he needed to take a pee, but it was too early to wake up for the day. His footsteps were hurried. When I said Hey bud he didn't respond. Then I heard the convulsions, the splashing. I kneeled behind him rubbing his back as he wretched into the toilet, me telling him that he would be okay. The first of many similar events throughout the day, most of which did not make it into the toilet. He threw up on the floor, in my bed, over the side of the tub, into the tub that he was sitting in, in my car on the way to the doctor's office, also sitting in the backseat as we returned while parked in my spot just outside, on several shirts of mine and of course into the bathroom trash can that had relocated to the side of the bed. I did two loads of laundry throughout the day, almost considered separating the batches that had vomit from the ones that had been diarrhea'd in, but hosed each piece off as best as I could on the back patio instead, then washed them together on the "heavy" load setting. A few articles I just threw away out of disgusted exasperation, colored super-hero underwear that he loves and had rendered much less heroic with evacuation tactics the body reserves for just these types of emergencies.

That was my day, baby. How was yours?