The Department of Deserts 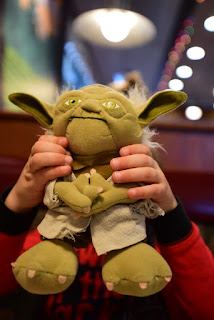 (Head of the Dept. of Jedi)

I woke up, went to the kitchen, made coffee, drank coffee, sat and stared at my computer, then came back to bed with computer. If I had my choice then I'd stay in bed all day. I could use a day spent thusly. Squandering time is among the ways in which you can learn to appreciate its value. If you have not learned how to misuse your free time then you have not learned how to live. Repose is the wellspring of cleverness. Perpetually doing things is not what makes a person interesting. It is time spent alone in leisure which does. I told better stories when I lounged around around my NYC apartment, jobless for years on end. A decade passed around me. I am at the age now where I need to do things, so I must occasionally force myself to do nothing. Today should be that day.

I don't know what's going on with all of my computers. It's becoming very tedious. They all have an accumulation of little problems and I do not wish to spend my time pursuing them to a resolution. I used to live for that process. Not any more. That was the old me. Now, I struggle to keep my cameras' firmware updated. Everything is designed towards the ease of automation, but at the cost of time spent poorly. Apple and Microsoft are both competing for last place in the market that they alone occupy. The former has ceased making professional laptop computers. Their new Macbook Pro only uses the name of the previous product. There is nothing "Pro" about a computer that lacks ports altogether. That is simply an iPhone that can't fit in your pocket. It is what you buy for your children's first computer, not what a power user needs.

I just priced out a new iMac that might satisfy my wants: $3500. They do offer 18 month financing, as a courtesy. This machine does not include a cd/dvd drive. That costs extra because you know, that famous Apple design. I bet the internet looks great on a 5k screen. The MacMini with a new TV isn't really an option, either. It is far too slow for my needs. I may be transitioning back to a Windows machine soon. If I'm going to spend my time troubleshooting a system then why not?

Nope, just looked at a Windows Surface machine. It costs as much as an Apple. More. I blame millennials. They have ruined everything with their willingness to subscribe to online services. Nobody is expected to curate their own collections of data any longer. Spotify represents the democracy of musical taste. The triumph of entrance over experience. Everybody pays an equal fee and has equal access. Imagine if a record store charged an door fee. When you walk in there are no records, there are just millions of people suggesting that you wear this or that set of headphones. That's precisely what Spotify has done to fans. Nobody seems to care. Why would computer companies make affordable computers for such a defeated demographic of users. Few seem to understand that "cloud" technology is just you buying somebody else's computer for them.

Fuck it. It is only day two of this odd new, prime year. Perhaps I should not start it off with perpetual complaint.

Let me think of something positive... I'm positive Trump's cabinet are unqualified for the positions they've been handed. I'm convinced he has made these appointments only so that he can later fire them and blame his failure on something other than his own decisions. I am certain that he will make an unnecessarily big show of letting the losers go. It is what he knows how best to do. Why should the Office of the Petulant be held responsible for the failings of people like Ben Carson or Rick Perry. We already know what he thinks about these two, if you listened to the debates at all. Now, we'll just wait for the first wave of firings. He'll announce his cabinet dis-appointments soon enough, draining the swamp in spite of himself. It will be the first bog incapable of sustaining its own muck. An unflushable toilet. It'll be a wet sinkhole by July and Pence will be in conversion therapy. At least the republicans will no longer need to be obstructionists. An ineffectual government should help free up some of their time for more important mischief.

Okay, let me try again with this positivity thing:

I'm positive about traveling more this year. Last year, 2015 I mean, I went on quite a few trips. I can't think of any that I went on in 2016. I just sort of gave up. No, wait, there was the festival in Vegas and a drive to LA with the boy, but that's it, I think. Not enough. I should commit to going places this year. A return trip to NYC, perhaps somewhere overseas. An exotic place, far from the madding crowds.

I will see if I can get a special license to travel with a sword. I will wrap my head in scarves and wear an eye patch, speak only the language of the desert. That, or maybe I'll just go to Burning Man again and find a sweet free-spirited girl to take in the moonlight and lasers with. Who knows, maybe she'll have a new iMac that I can use to Spotify. We can share our subscription because life is an eternal playlist, baby baby baby.