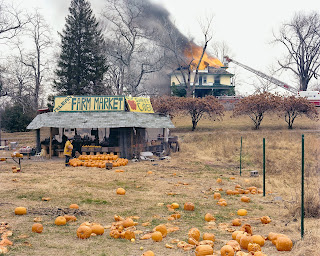 
The question on everyone's mind: Can America withstand reality, television, or possibly both?

I keep telling myself that I should have supported Hillary. She was the great blank hope. Insert check Her. I'm kicking myself now because of, well, you know, Bernie. His slogan should be: Democratic Socialism Yesterday!

What will the apocalypse look like from out here in the country, I wonder. Everybody is so concerned with the shape of the post-apocalyptic world. I am more curious about the opportunities provided by apocalypsin'. My guess is that the a-bomb generation will make millennials their slaves. So, at least one problem solved there. Though, my generation will likely be fed to the millennials to keep them fit, as strong workers for new Mother-A 'Merica. Anybody older than me will be too gristly. They will be tanned so that their hides can be used as a cheap leather alternative. Sort of a pleather that you don't have to go to the fancy store to get. I suppose some of them will need to be kept for use as radiation canaries.

Am I the only one that thinks Homeland Security sounds like a mid-western anti-intrusion device? A sort of ADT.com for America's broken windows. What are they doing, guarding a wheat combine? Their agents should be called harvesters from this point forward. Vital to the Organ, their new slogan.  Defenders of The United CORPS.

And why aren't executions public any more? Is there a reason for it, outside of Texas? If not, we should give that some new think. If it was corrupt liberalism that kept us from enjoying the public blade then we should revisit those reasons with our new American eyes.

Who needs a peer-review when you are unparalleled? If advice was meant to swim upstream then it should have arrived by now.

The last person to be executed using the effective apparatus of the guillotine was in 1977, after America's bicentennial celebration. Though it did not happen here in the homeland, of course. Those savage French made off with the detached cranium, never to be seen or heard from again. Why do they get that footnote of glory? Hopefully nobody tells Colossus Little Hands of this historical perversion.

Why does torture have to be effective? Can't it just be for fun?

I bought a bunch of new socks and underwear in preparation for today. Apocalypse or not, there is still a dim hope that I might get undressed with a woman at some point. Maybe in jail, or just as a regular part of camp life. Who knows, perhaps I can trade a pair of socks to keep from being raped, for that moment. Ugh, the image of being gang raped by a group wearing my new socks is too much for this morning.

I have a few things of value that maybe I can tuck away for trade, like the dignity of others. I understand it is the very hottest of internment commodities.


Important tips to get through today: Don't forget to make a backup! Keep wiping until there's no more brown. Drink vodka. Sugar is the new cholesterol. Olestra is the old Ex-Lax. Bacon is bacon is bacon is bacon. Do not Tweet directly at the new president - he will fling feces at you if your eyes meet.

There are plenty of things that won't change. Republicans will still blame black people for all of their problems, for instance.

La Jetée from cinebuleuse on Vimeo.