All The Young Dudes 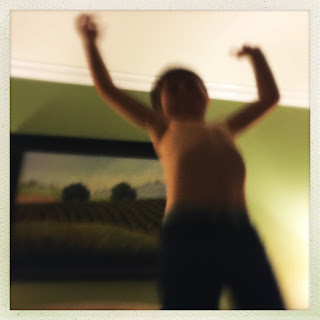 I picked the boy up early yesterday from Carol, the woman who has watched and taken care of him in part since nearly his birth. He goes to her place one day a week, Friday, with his buddy Sebastian. His mom and I decided that we wouldn't subject him solely to the rigors of pre-school, that his Fridays could be spent to some degree where he chooses, and why not? We only get so much say about things in life. Unshared generosity is not.

After, we went to what recently ceased being our locally owned supermarket and ate sushi and a smattering of choices from the regular food bar, warm plastic platefuls of our favorites. The diet of non-fugitve wanderers. We looked on the phone and tried to choose a place to call a destination. This is not the type activity that a five year old excels at, or perhaps he is too good at it. He kept picking the center of San Francisco Bay or somewhere far off the coast, drifting out into the Pacific towards Bangkok and beyond. The North Pole. He wants to thank Santa for his presents, but on his own terms, not with the fat man sneaking in and sneaking away.

After we ate, we went home and threw some important things together in our backpacks. We put our own pillows, blankets and the ever trusty night-night in the car then headed north up the two-lane highway that defines the center of Sonoma Valley - towards Santa Rosa, then Guerneville, Guyserville beyond that, maybe Eureka. Without a destination, just somewhere Unhereville. Practicing for otherness, reminding ourselves that outside there is always a road elsewhere.

Road life rendered us wearier than we may have guessed at the onset, and much more quickly. Before we abandoned little highway 12 for the interstate, the 101 North, the boy was already gathering intelligence on how much longer it would be. The rain suggested escape more than adventure. Everywhere visible, which wasn't distant, there were low hanging rain clouds, patches of darkness and the glow of what must still be the day's remains of sunlight above. It let through diffuse and distracting smudges of light, circled by deep blemishes of darkness. Beyond that, only twilight and night's arriving.

We listened to Bowie's "Live," then The Cure's "Faith." What would have been a more perfect lineage-set of albums had it been Bowie's "Stage," instead.

The boy told me ghost stories about the Haunted Mansion at Disneyland, how he and his mother saw a few, they were there floating between them in the "doom buggy." But not to worry, he was able to protect Mommy because he knows ninja-stuff, and that the ghosts probably do not. He must have assumed that I would be worried that he and his mom were in such close proximity to ghosts. The boy is complete in the sweetness of his love.

He and I chatted excitedly and ate snacks, travel permitting deviation from our diets. We also brought carrots, apples and bananas to offset the Haribo Gummi Bears, a bag of cheese puffs, and Pepperidge Farm's Sausalito cookies. (I know, I know. I can read, also. I see the string of damnations. That set has its virtues, redeemed only by its vices.) We ate everything, though not in entirety. There is breakfast to still consider, so we saved some Gummi bears for the cusp of morning soon arriving.

Once at the hotel that we found far off the highway, past the bars and restaurants of Geyserville, I made the tactical error of asking for a room on the second floor, thinking this would entertain the boy some, forgetting that his room at mom's is also on the second floor. Stairs and balconies are all old hat to him. Once inside he immediately started jumping on the bed and bouncing along loudly on the floor a'la Winnie the Pooh's Tigger. This is where my mistake became more audible to our southern neighbors. I encouraged him to jump mostly on the bed and tried to convey the idea of the social contract in its most abbreviated form, granting peace to others through silence. None of it worked, the boy was buzzing. He had the proverbial "ants in his pants" since long ago, back when we had been eating salmon and tuna in our little faraway village under the rains.

I tried to capture his joy in pictures, though it was too boundless to be framed. It announced itself in periodic booms as he jumped from the bed and traversed the floor with squeaks of joy and bursts of laughter.

I've never met anybody who likes to be tickled more. He currently holds the record.

In time I encouraged him to put on his cozy onesie pajamas, but he insisted that he sleep in his underwear, like when we're camping. There comes a point where straightforward parenting is just absurd, we had drifted from that shore long ago and under cover of night. How do you insist that a kid wear his pajamas after you've fed him junk food as if it was a virtue of travel.

We don't need no stinking badges...

Within the hour I was able to calm him down, just a bit. I lured him into the life of a dullard with cookies and cartoons streaming. We watched together until the day could take us no more, we drifted away to the sound of the iPad sliding off the bed to the floor, pulled gently by tomorrow morning's adventure. 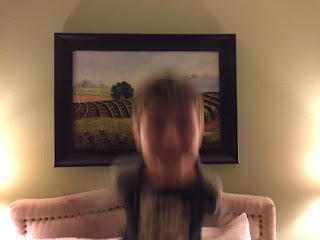