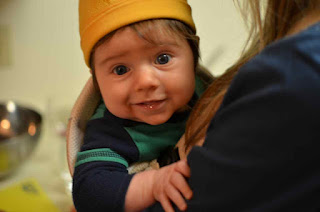 I awoke early, stayed in bed listening to the rain, yesterday's birthday boy still sleeping next to me. I've started to go to bed before him. He stays up too late watching cartoons, the late-night stuff that comes on after 8pm, his version of the 80s David Letterman.

The boy's birthday party yesterday was a great success - kids running everywhere and playing, jumping on bouncy slides, eating their choice of healthy and sweet snacks. I saw a chocolate cake made of Kit-Kats and M&Ms. I swear it. It was better than it sounds, as was the slice of fruit tart, and all of the many cinnamon rolls I ate.

The boy has a new bike, though it looks as if it might be a little bit too big for him. Hard to say, we may need to lower the seat a bit. The rain yesterday prevented us from giving it a test ride. The rain will continue for the next week, reports claim. There is a 100% chance of precipitation until Wednesday, at the very least. The 10 day forecast doesn't show any sun until next weekend, and even then it is only a glimpse from behind an icon of a cloud.

This morning he woke up and asked me to show him pictures from when he was a baby, and when mommy was pregnant with him. As he asked about that time, I somehow ended up explaining that he came out of mom's vagina. I kept the description of birth and all that leads up to it abbreviated. He seemed to accept this version of the facts, as have I.

Maybe I was wrong about the acquisition of things. It seemed to make the boy happy enough yesterday, perhaps it will have the same effect on me. I do want that lens.