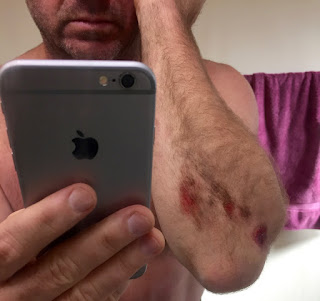 Yesterday morning I set off for a bike ride with the two women who tried to kill me in the swimming pool not so long ago. They wanted to get started at a nice early 8am, which was fine though a bit chilly. I put on a few layers. and we all started off, using Hwy 121 to cut through the hills towards Napa. We rode together at a comfortable pace. It was a route that I don't often take, so there was a novelty factor to it. The views of the bay off to one side are really something from high up in the hills. By 9am I was getting warm so I stopped and took off my light windbreaker jacket, rolled it up and tied it around my waist. About two miles later my back wheel locked up and I slammed down hard onto the roadside pavement, the sound of my helmet making a loud plastic crack as my head bounced from the shock. I skidded off the side of the the road leaving a layer of skin from my elbow in an untraceable smear inside my shirt, whose fabric also tore up the sleeve, in part taking the place of what would have been my skin and bone.

A 48 year old body landing on pavement at about 15 mph is always an unwelcome experience, the muscles and bones and ligaments and tendons all respond slowly over the next 24 hours in what then becomes a unison of chorused pain messages. I could hardly roll out of bed this morning. I brush my teeth like John McCain now. The entire right side of my body has frozen up with stiffness.

I've learned the same lesson many times before, though it has been decades. As soon I was able to process the basic fact of having gone over I started trying to piece together the how and the why of it. There was a pvc pipe at the scene of the disaster, resting underneath my bike, that I thought I might have somehow caused the crash, but my riding buddy pointed out that my jacket was bound up in the rear brake. Yet another argument for disc brakes, I guess. I've caused myself misery in this exact same way before many times, as a kid. The remembered pain of previous lessons learned comes right back to the mind to remind and taunt.

Ah yes, of course... the old jacket in the caliper brakes mistake.

I was able to get my bike back to operational status by loosening the rear brakes which had seized up a bit in the crash. They are still rubbing ever so slightly, but I was able to carry on after about 10 minutes of bleeding and whining. At least my crash happened in front of two women so that I could maintain my cool factor, because nothing says you're tough quite like letting few wet tears break free at the onset of pain, and some hopping around on one foot like a real man.

One of them had already called her husband to come ambulance me away, but it wasn't really necessary. My brake and gear-change handles were smashed over towards one side and had grass pieces jammed up into the components, but they could be straightened out by hand. Once back on the bike my body started to give me reports on the scope of the damage. Each of the first few pedal strokes caused a series of questions and answers along the right side of the rib cage. The full weight of my body had slammed down along the side up to the shoulder. I must have even bounced once.

Riding loosened me up a bit, though I knew what was coming, and I was right. Today, everything has caught up with me. Three cups of coffee, two aspirin, some Advil, and an Aleve, just to cover all of my bases and to help verify that my liver wasn't damaged in the crash.

After we reached the end of an old decommissioned winery road near the Napa river we decided to turn back and head home. This is where one of my friends told me about a "single friend" of hers. She described her as sort of a consistently heavy drinker that has let herself go a bit over the last ten years or so, a little bit mean-spirited but desperate to get laid, even angry about it at times lately. Her physical description was that of a woman that dresses and looks much like Peppermint Patty.

Tempting, to be sure, though I told her that I'm not quite that ready to date yet. I've already had a Lucy, a Marcie, and even a Sally Brown. I'm just not sure that I'm quite ready for a Peppermint Patty yet. I think I'm still shooting for a woman that wears eye liner every now and then, a lipstick feminist, not an undefeated arm wrestler.

That made me giggle. There's some truth in there.

I'm not sure why anybody even has sex any more. It seems to be about the silliest and most unnecessary thing there is. Just go online and watch people. I swear, there are thousands of short documentaries on the subject. It's fascinating after about 10 or 15 seconds, once it becomes a little easier to separate the love from the lust, the friction from the friction burns.