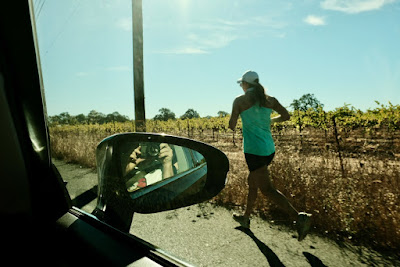 I brought a gift over to my friend's house last night, a token of my appreciation for all that he has done for me, and sat on his back porch and had a beer with him. We talked of a number of things, mostly work-related, but also of the shifting interests of our own lives. He studied music extensively and has a doctoral degree in the subject. He relayed that he now questions the meaning and purpose of his previous involvement. He has begun to ask himself why he chose "that dream" and what that means to him now in a changing, later life.
Several observations occurred to me on the drive home. Some where I felt lucky to feel the way that I do, others not as much. The ways and methods in which we give our lives meaning are mostly petty and far less significant that the meanings we ascribe to them. Yet if we never realize this then we are - at times, and only some among us - able to accomplish wonderful and nearly super-human things. People create art, help others, work towards improving their world, or even their own situations, quite admirably when not restrained by doubts. I recede and whine and wonder why.
Some others go on killing sprees, presumably to assert an implacable statement about life and death in the hearts and minds of themselves and others. It strikes me as an interesting fact that cops never execute a spree killer at the moment of apprehending him, even "by accident." If we are to believe all that we are told of their nature - cops - then one would think that every now and then one might, quite literally, take "justice into their own hands." I wonder what the public opinion would be of the lone officer that might decide to do so. I imagine that their action would be regarded along almost strict political lines, as most all else. The "good guy with a gun" crowd, I imagine, would be elated and would decry that officer's arrest and likely conviction. Who, I wonder, would denounce the act.
The hyphenated phrase "extra-judicial" has always tickled me for reasons that I can't quite explain. Or, can not explain very well. It reminds me of an old phrase that I used to say all the time to people about drugs: "If a little bit of fertilizer is a good thing for your lawn, then a lot must be great."
Sometimes I wish that I would have listened to myself more along the way. Other times, I wish that others would not have done so.
.
Posted by Sean Q6 at 8:10 AM