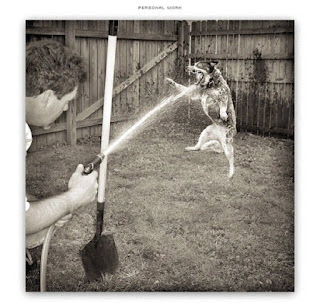 I went to my first swimming "session" yesterday. It became pretty clear where my improvement area is: every stroke. This is not to say that this area of improvement announced itself early on and then remained at that poor performance level. Everything about me became less and less graceful over time. I think I was doing the front crawl stroke backwards. I may as well have been learning to ride a bike on a moon made of molasses. Part of it felt natural and came back to me, like the part that I was never a great swimmer. I merely grew up in Florida, which means that I am capable of swimming, nothing more. Though, growing up in a place like that feeds you the false idea that because you've done things at all that you are also adequate at those things. Similar to the way that all Floridians think they can drive. Or worse, that they believe themselves to be good drivers.

My swimming style could best be described as +/-freestyle. It belongs in the "más o menos" category, though perhaps still in the survival competition, rather than the purely athletic one.

I am not nearly buoyant enough, nor does my body slice through the water in concerted rhythm with my breathing. After about 30 minutes of doing 25 yard laps back and forth the closest descriptive approximation would be that of the image of the iconic drowning man, water splashing into other lanes, me fighting invisible underwater monsters. My arms were flapping and my feet were kicking desperately. There was a scared hopefulness to whatever motions my head was making, but very little forward progress. Each time I hit the wall it felt internally to be an act of the greatest luck. Nobody made goggle contact with me. I saved myself each time by making it to one side of the pool or the other. Had I not brought my own friends there then I would have had none.

No, on this I do kid... they were all very helpful with and hopeful for me - the way adults will still encourage a kid that completely sucks at something.

All of the other people there were on high school swim teams or are currently professionals training for competition. It helps me to believe this. They were just swimming near me as a joke. I was the complete vision of an embarrassing older person. Older man, I should say - lacking the grace, dignity, flexibility and litheness that women somehow sustain through life. The only way that this simple fact might have been emphasized more is if I would have shit my swimming shorts and been taken away in an ambulance after not knowing how else to handle the embarrassment.

When you are unable to respond to basic questions, wheezing being the only sound that you're making, somebody has to make the judgement call. I did nod YES! to the question of whether or not I have insurance. I tried to speak the word "stroke" through my paralysis of shame, but the word means different things to different age groups, and is easily taken out of context. They warned me that they were going to call... I refused to take off my swim cap or goggles, hoping that would prevent them from later recognizing me at the local markets.

Were it nor for the collective magnanimity of the Sonoma swimming community then I would be preparing for my funeral and wake today.

The last time I remember having this much chlorine in my nose and ears was when being held under water by a series of bullies in Florida. Maybe they were my friends, I don't remember. Distinctions become murky the closer you live to a swamp. I remember going "gigging" in one of the tributaries of the Wekiva River when I was a kid. Perhaps this is where I developed the fallacious notion that I could swim - that I had avoided being gobbled by one of the many prehistoric monsters that inhabit the waterways there. Or, perhaps I'm just being a man, believing that I can do anything I set my mind to, and well. You know.... the lessons we teach kids but then shame adults for ever having naively believed. Trying to correct for faith's misapplication, once embraced.