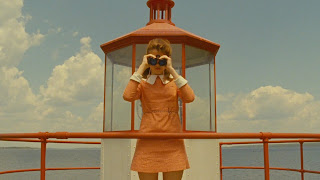 I finally got around to seeing it.  There were scenes in which I got choked up at the tender innocence of it all.  I loved it, of course, and would love to see it again while it's still in the theater - to go whimper by myself at fragile and assertive scenes of youth and naivety.

This morning I had to verify that Kara Hayward was a minor, so that I could feel sufficiently guilty about watching the film.  I kept nudging Rachel during the watching of it, pointing out her hip-to-waist ratio.  I once read that the ratio between a woman's waist and her hips has been found the be the most attractive quality a woman can have.  It was the result of some intensive study on such things.  The most attractive quality a man can have is his ability to support a woman.

My interests in the girl do not even rise to a level to qualify as Balthusian.  I mean, it is truly creepy, vile stuff.  But that's why Anderson cast her, so be it.  He knew what he was doing, and why.  The subject of the film is the pain and confusion of sexual awakening, it invites contemplation.  Demands it, in fact.  I am the victim here.

I don't have anything profound to say about the film.  I merely enjoyed the untarnished innocence of the imagined past.  The telling of the story was deft and clever.  There were several moments in which I alternately laughed out loud or held back a little fond sob.  I should warn you that I am a buttercup when it comes to watching films.  The slightest emotional provocation in a film will make my eyes water up and I'll turn my head into Rachel's shoulder in childlike shame.  Even talking about a scene afterwards will sometimes have this effect on me.  That being said, I somewhat kept my composure last night, but still found a way of braving through the tears.  The darkness helps.

There was one scene in particular that I thought was hilarious:   Bill Murray's character (the girl's father) is standing there (the girl is missing, the two kids have run away together, the "authorities" have found a piece of evidence), they are all standing together and he's looking down at something in front of him.  He says,

"This is horrible. What am I looking at?"

They cut to a quick montage, leading off with a nude portrait of the young girl that is rendered sufficiently poorly while still retaining some unguarded charm.

It was a "date-night" for Rachel and I and we went to the movie, to dinner, and drinks, with our friends from the farm.   Just good wholesome American fun, like camping under the bed. 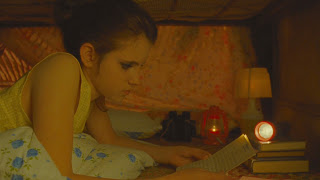