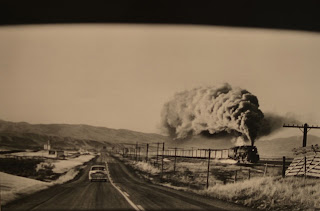 Another day.  I have been having some very conflicted emotions lately, going through changes will do that, I suppose.  I won't go into details here but the most contentious feelings that I've been having are about one particular person.  I've tried and and I've tried and now I've tired of trying.  No more, for a while anyway.  Life does not get any easier once you have children.  It changes, to be sure, but not all of those changes are preferable.  It intensifies in some ways, unexpected shifts in routine and protocol.

There is no point in writing about something in which detail must be avoided.

Another day.  The heat here, like everywhere else, has been difficult.  July was the hottest month in America's recorded history.  Those who know better don't argue too much for it being such a direct sign of global warming, but certainly it is a sign of something.  How could it not be.  We are to be told that other places are not as hot, or that the winters here and elsewhere balance those numbers out, softening the overall effect, or that the heat index is only a liberal lie.  But some of those things are also evidence of global warming, I had thought.  I suppose the experts at Fox News have it all figured out.  Why worry.

Another day.  There are things that I can not seem to make work properly on my new site.  Minor things, but irritants nonetheless.  When following links it will close my site's page rather than opening the link in a new tab or a new page.  The "Previous" and "Next" buttons don't work from mobile devices.  The page margins and layout don't display quite properly from mobile devices, etc., etc.  The site you're now reading is powered by Google's "Blogger" software.  It is easy to use and easy to troubleshoot.  Wordpress, though more powerful, is also a little bit more difficult.  I am glad that I am learning it as I go, but change is difficult.  I try to embrace it, knowing that getting older will bring more of it.

Nobody likes to struggle with the familiar, like tying a shoe or loving for life.