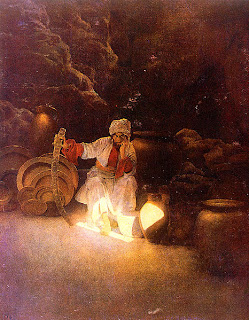 I'll never learn.  Yesterday I wrote somewhat fictively about a woman's breasts, the size of them in particular; and even more fictively about my memories of her in high school.  I thought it was funny and harmless.  You see, another old friend, who apparently has spent much time memorizing breasts since adolescence, quizzed me on these two in particular.  I went and checked, on Facebook.  Silly I, Facebook leaves a trace.

Now, that my friend has found his calling as a middle-aged+ internet troll is only one part of this story.  That he enlisted me to be his salivating troll's assistant is quite another.   I'm not even sure how it happened.  At the mere mention of breasts I was off and limping, eager to look, with an almost biblical fervor and zeal.  Crawling out from under whatever rock we were currently giggling under, we chose to use the power of Facebook for evil rather than good.

No harm was intended and if the possessor of the breasts in question is a regular reader of this site then you have my sincerest apologies.  My friend and I have apparently never taken the time to grow up.  We are still as two boys sitting on a mall bench, drinking Orange Julius', elbowing one another in the side, giggling uncontrollably, marveling at the liquid language of fairer sex.

You have my apologies, even though I am confident that it might one day happen again.

Moving on, Robert Hughes, the art critic died yesterday.  If you're not familiar with him you should take the time to watch and/or read "The Shock of the New" and to read "American Visions."  He has been an influence over me for many years now as well as being somebody whose writing I have often taken the time to share with friends.  Two other important works for me were "Goya" and "Nothing if not Critical."  He is as exciting to learn from as he is too disagree with.

Not everything that he wrote was worth reading though, avoid his self-pitying memoirs, they are abysmal.  I do not mean his historical account of Australia, "The Fatal Shore."  I haven't read that one, but I've come to understand that is is regarded as one of his masterworks.

All of my friends are preparing to go to Burning Man.  I had thought that Rachel would be eager to have me go this year but oddly she seemed to lean towards fiscal caution when I mentioned it yesterday in what I had hoped might be an unexpected 11th hour coup.  Nope.  An evaporated Pleistocene lake bed high in the mountains, filled with drugged out naked girls, and a diminished sense of consequences, is apparently not what wives and mothers want for their husbands.  Funny, that.  Perhaps I'm too old for it now anyway.  Drugs are great, of course.  But a week of ingesting them nearly non-stop... of that I am becoming increasingly uncertain.

I am still staunchly pro-human-sacrifice, of course.  The surrendering of the self over to the universal unknown, by will or by force.  Whatever.  I am here to please the demons and the gods.  Of the universal oneness, I have yet to feel.

Of the universal unknown, I am always home.

Last night I was talking with Rachel and her mom and I referred to the Sikhs as being muslim, wrongly thinking that they treated Mohammed as a prophet and the muslims claim the group as their own because of this.  They most certainly do not, and the Sikhs are claimed by no religion other than their own, the 5th largest of its kind globally.

Where I grew up, or should have done so, is a magical place called Altamonte Springs.  To get an idea of how enchanting it is one must look at the chosen image that represents it on Wikipedia.  Because nothing quite says "mystical" like a water tower, a highway, and a halfway completed (now nearly abandoned) religious office complex.  One can easily imagine my desire to get out.  After reading "On the Road" I fantasized about walking to the end of my street, which ended at the highway seen in the link above, and hitchhiking my way to freedom, somewhere north of Central Florida.

But more importantly to our story, there was a house in my neighborhood inhabited by a Sikh group that also ran a lawn maintenance company.  They were quite successful and did a very good job.  In fact, I was often jealous of them - jealous of their industriousness, persistence, and success.  I should mention that I also ran a small lawn maintenance company that helped me get through college.  I only mention it as a counter-point to them and what they were doing.  My efforts represented the other end of the ambition spectrum.  But their house was arranged between the Altamonte Mall and my house.  So, when I was much younger I would often cut through their yard, hop their fence - heading onwards towards the mall, pockets filled with quarters.  So many kids did this that a path had been burned in their yard and the chain link fence had been crushed under the weight of perpetual adolescent passage.  It was shameful and we thought them somewhat scary.  We had seen Ali Baba and the Forty Thieves.  We were no fools.

But my misguided assumption about them was based on the accumulated facts that they grew their beards, wore a turban that resembled a kufiyah, and their flag had the threatening image of the crossed jambiya.  (I should let it be known that I had to look up two words from that last sentence.)  In the mind of a child these were knife wielding Arabs, determined to slice the throat of any wayward trespassing youth, or to abduct them and sell them as slaves on the north coast of anywhere else.

As I grew up, in small doses, I came to understand that these were the more philosophical of their kind, even pacifists up to the point of being pushed.  They did believe in defending themselves and others when in danger, etc.  But I never updated the internal files on this group, or never very thoroughly, I should say.  It is shameful, I know, but I am an atheist and have a limited amount of time and resources to spend differentiating between the various religions of the world.  I try to leave them alone in the hopes that they will feel the same about me.  But I have not always been an atheist and this is clearly an oversight.  I used to pride myself on knowledge of such things.  I would wear my imaginary knowledge like a steely jambiya, etc.

But we would cut through their yard, destroying their beautiful lawn with our well-worn path, and they rarely said anything about it.  They must have enjoyed occasionally catching us because when they did we would shit our pants with fear of otherness, convinced that these strangers from the east meant us much horror and harm.  But none ever befell any of us at their hands, that I know of.  It was all just the ignorant imaginings of a young child, intent on seeing the strangeness of the world, of seeing that same strangeness reflected in the world.

No Burning Man for me this year.  If you go there to look for me you will not find me wandering, wearing only a naked kufiyah in a sand storm, wielding a forever unused jambiya on a handmade sea-shell belt, drifting from desert vision to vision, shadow-boxing with imaginary trees moving in the night, howling past the stars as they fall and spin and float around us.