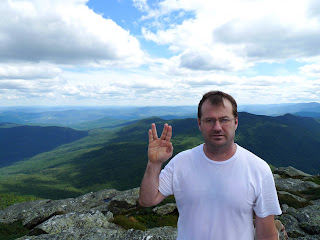 Well, things change.  I've created a site that is monetized with ads.  I've been doing some research on how to set up just such a site - it was surprisingly easy - and now we're live.  The next step is figuring out how to draw traffic, lots of it.  That can be the difficult part, I'm told.  You get paid a small amount for overall traffic but where you really make your money is when people click on the ads.  Clicking on ads is the "like" button when you're not on Facebook.  The main difference being the money that then gets distributed.  This is not a request for anybody to do so, only a brief explanation of how sites function and survive.

I wish that I would have known what I know now when I started this site.  I wouldn't be rich but I would be less poor, though admittedly not by much.  I might monetize this site next.  I just haven't decided yet.

What made me finally launch this project is that the Google search term "Laziest Nerd Ever" brings more people to my site than any other term, so about two years ago Rachel and I bought the domain, where it then sat dormant for two years.  This site has been the number one hit on Google for that phrase for about two years, all from one post I made here.  The new site just overtook my blog in the last two days.  If I can increase my traffic by about 100 fold then I will have created a job for myself.  No easy task, to be sure.  But it is one in which I'm curious and eager to pursue.  Beyond that it means possibly going back to work at a place that I might not enjoy.

Also, if this site works out for me, then it will give me time to do other things.

I have begun to learn the protocol of sites like reddit.  If you've never seen this site then I suggest checking it out, but not going much further than that on it.  I wouldn't say it's addictive, but it can be occasionally engaging.  The community of reddit users can be quite hostile though if you breach their protocol.  I just found that out today, angering one frustrated masturbator in the process.  I always try to use as a litmus test for my writing this simple question, "Would I say this to a person if we were face to face?"  Most of the time I would, though not always.  Anybody who knows me knows that I talk much like I write, at least when it comes to the more shocking content.  But I wanted to reach through the computer screen and throttle this little angry shit.

The world will be a very different place in the future because every single person in it one day will have been raised in an environment in which there are diminished consequences, or none at all.

What a wonderful world it will be....