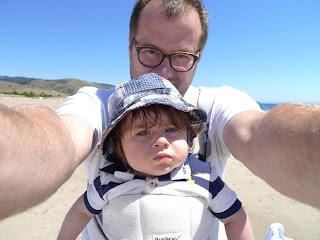 We went to the beach yesterday.  A nice family outing, the boy's first, sort of.  We took him to the Point Reyes Lighthouse a couple of months ago.  But this was the first time he was able to experience the shore, waves rolling onto the beach, the wind, the kites in the sky, the patches of people, frisbees and footballs.  Barkley seemed to be having the most fun.  It was ready-made puppy joy.  He chased along the shore, darting back and forth to avoid the incoming waves, barking delightedly in his lilted puppy trot.  Once, unsuspecting, a wave made it to him and partially overtook him as he stood looking up at us excitedly.  Ocean water somewhere around 50 degrees shocking him into immediate doggy action.  It was only his paws and legs but it was enough to teach him that the ocean is not to be ignored.  He spent the rest of the time running along with the water as it broke on the shore, never quite turning his back on it again.

We were unprepared and ill-equipped to have a baby at the beach, though it was still fun.  Babies do not stop crawling because you want them to and a sheet does not contain them for very long.  They require constant attention, circumvention.  Somewhere deep in my unprimed mind I imagined us all four relaxing on the beach together while the sound of the waves rolled over us in a gentle breeze.  Not exactly.

We both scrambled to keep Rhys out of the beach sand.  Rachel, in her cute little hippie-beach-outfit, had brought a small umbrella to be used as a block from the sun for the little guy.  Nope.  It was twisted and inverted in the wind, Chaplin-esque.  I think I might have been able to protect him more effectively by waving my hands between him and the sun, hoping to block an occasional ray.  The umbrella required almost constant attention only to keep it in place.  There was no guarantee that it would not suddenly collapse and possibly hurt the child when the wind picked up.

I make it sound like the experience wasn't fun.  Not true.  It was a lot of fun, just not the traditional fun one expects at the beach, like a Florida beach.  It was a fresh, new experience for us.  We discussed various contraptions that other parents had acquired for such a trip: collapsable playpens that have good protection from the sun, bright colors, etc.  The types of things I've ignored my entire life, even somehow when on heavy psychedelics, until now.  Now I find myself actually looking for them, seeking them out, wishing I had thought of them in advance.

The drive to and from the shore is a markedly pleasant one. The terrain changes dramatically from the rolling hills of our valley, through the farms, out on to the point and through the forest hills, then to the dunes that lead to the beach.  Much like the valley here it can not be relayed in a single image, somehow the accumulation of details does not tell the story either.  Only the eye can capture it in the way that it is experienced through time, moving through its vast open spaces and the subtle changes of doing so.  It is known by the life moving through it, and it moving through that life.

The beach teaches us things.  When I was young it taught me not to drink in the sun.  I remember passing out in the back of a hot sand-filled car and waking with a terrible hangover maybe an hour later, covered in sticky and abrasive unpleasantness.  It was Malibu Rum or some other hideous concoction that did it to me.  That, and me, of course.  A dangerous combination.

We will search out an appropriate beach apparatus, one that contains and entertains and protects.  If they made a version that was for 20 year old kids back in the 1980's then I might not have even needed to write the previous paragraph.

But I did anyway. 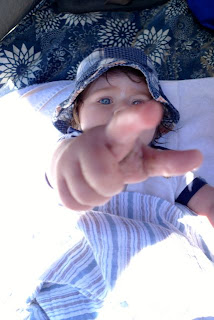