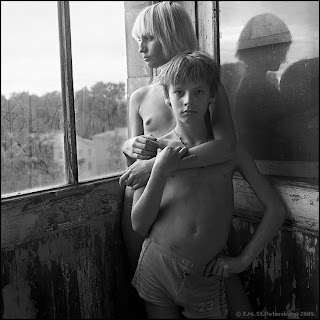 It must have been 1979.  We all knew each other from the neighborhood.  There were at least seven or eight of us all together, but it was mainly us three.  Nicky, Steven and me.  We were just a group of misfit kids, just like others, but more than most.

There was a patch of undeveloped land behind the last row of houses in the neighborhood.  It was a wide strip that stretched all of the way to the golf course.  We weren’t supposed to be going through there.  A kid had drowned once in a muddy river that barely qualified to be called that.  It was just a little creek  that was created mostly of runoff from the golf course.  Even the golf course could barely be called that.  Nobody ever seemed to be taking care of the fairways.  There were large areas where it was mostly dirt, or dried brown grass, even though it rained most every day in the summer.  I only ever saw a handful of people golfing the course each year.

Before the kid drowned nobody ever called it a river.  Afterwards, all of the parents did.  It seemed unfitting for a kid to die in some golf course runoff water, little more than drainage sludge that had found its path.  Everybody started referring to it as “the river in the woods” like it was even a river, or those were even woods.

It was impossible to cut through without crossing it, the little river.  There wasn’t a single place where it was difficult to cross.  After the drowning we always crossed there, at the spot where he died.  We could never figure out how he drowned.  He must have stood on his head, or crossed doing a handstand, or tried to.  None of us saw the body but we all saw them pulling away from the neighbor’s driveway where we would cut into the trees.  We saw it all after they had pulled him out, everybody did, as they were putting him in the coroner’s car, just a bag and a body on a moveable metal bed with wheels.  We stood together and stared at the car after the door had closed.  None of us liked him that much.  We all felt bad about it afterwards for weeks.  For a while we would say his name like he was one of us, but then we stopped that.  He wasn’t.  We all knew it too.  He was a couple years older than the rest of us and he didn’t have many friends.  His parents weren’t even crying.  They were just staring at everything, moving slowly.  Then they just got into one the cars and pulled away with everybody else, like they were going to the grocery store, or the movies.

At night the spot was spooky.  It became that way.  We would spook each other with it.  Telling stories about being able to see the boy’s face in the reflected moonlight.  Ghosts, voices, all that.  It was spooky for sure, that spot.  After that.

There was another place not far from there where there seemed to be a hallway made of briars.  It was just a group of bushes that had grown together leaving a sort of walkway underneath them.  It didn’t lead from anywhere or to anywhere.  It was a point of constant daring.  We claimed that the boy’s ghost was still trapped inside of it, trying to get out.  We would stand around it, challenging each other to walk through with our shirts off.  Well, not Nicky.  She didn’t have real titties yet, but we knew that she was supposed to soon, that they had just started.  She knew it too.   She was a terrible tomboy.  We would tease her about it, but never in the really mean way.  Just the way that we would tease everybody about everything.

I caught Steven and Nicky one day in her garage.  He had her up on the tool bench and had his forefinger inside of her.  She was sitting, facing him with her legs spread, her head was tilted back and her eyes were closed.  They were both making noises.  I saw that his finger was up past the second digit.  When he pulled it out it made a sound and I could see between her legs for a second.  I saw everything.  It all happened so fast.  She turned to jump off the bench and I saw her naked butt then too.  I had seen that before.  He had his pants down to his ankles but his underwear up, which I thought was stupid, but I was relieved because of it.  He seemed to know this too, that it was stupid.  They were both embarrassed.  I was too.  They pulled themselves together and ran out of the garage and acted as if it hadn’t happened.  I walked out of the garage and they were in the front yard.  They both wanted to go somewhere else, anywhere.  The suggestions, the possibilities, poured out of them in a torrent.  They were eager to move on.  I was still lingering somewhere back there in the garage, replaying again and again what I had seen, what they had done.

Nicky had let us watch her climb poles before, to see her panties, but she didn’t have any panties on this time.  She left them in the garage.  I saw them crumpled up there as I walked by, following them both to the front yard.  They were light yellow and seemed unspeakably clean in comparison to the bench where they sat crumpled up and abandoned.  It kept crossing my mind later that day that she didn’t have any underwear on.  I couldn’t stop thinking about it.  Later, I went back to the garage but they were gone.  Her family was inside eating dinner when I snuck in to look.  I could hear them talking, the sound of silverware on plates.  I waited to hear Nicky’s voice but it never came.

We were inseparable, or so we thought.  There were times when I felt it between us, the knowledge.  We would make little jokes, just learning to be vague, our first lessons in subtlety.  None of us were very good at it.  It would always result in much flustered blushing.  But we all three knew.  We all three knew that.


I came home from school one day and my father announced we were moving.  It would be happening soon, during the summer, so that it wouldn’t affect our school year.  That’s what we were told.  We began driving over to where our new neighborhood would be, looking at the empty house that we were to buy.  My parents deciding in advance how things would be for us.  We all knew what it meant.  Our friendship would be demolished forever.  Nicky and Steven, of course, would remain.  I knew that too.  I hadn’t meant to ever keep them from each other, but now somehow I knew that whatever was going to happen would happen.  I imagined their clandestine impulses suddenly unleashed.  I imagined all sorts of things.

The week before the last day we took extra time each day to run through the strip of trees that separated the neighborhood from the golf course.  I daily imagined all manner of different colors underneath her pants, and skirts.  Even her socks looked erotic.  We would both let her run in front of us.  The day before my last Nicky stopped me near the gate and kissed me on the lips, in front of Steven.  She held me there with her lips pressed to mine, and moving.  We were standing in the neighbor’s yard, the one we used to cut through to get to the trees.  We had worn a path there.  Not just us three, but everybody.  He didn’t say anything at all.  It was as if we were all just standing there, watching it happen. 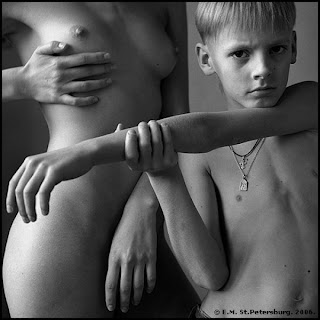