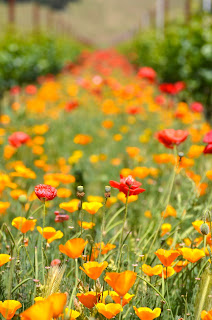 There is a state highway that runs between Sonoma and Santa Rosa, Hwy. 12.  It is a very nice drive up the valley, through the heart of wine country.  Yesterday I decided to go for a bike ride, wanting to get back in the habit of exercising.  Too often I exercise in a routine.  I will ride the same ride, day after day, until suddenly I bore of it and then quit altogether.  So yesterday I decided on a ride that I had never tried before, straight up Hwy. 12.  As I said, in a car this drive is quite pleasant.  It is easy to believe that it is just some gently rolling hills.

Trying it on a bike grants a very different understanding of the terrain.

It is uphill almost the entire way there.  The hills do roll gently but that almost makes it more difficult rather than less.  They never seem to roll downhill in your favor for long enough.  I just hadn't noticed how it is basically a long steady incline.  I had chosen a place that I wanted to ride to from driving past in a car.  It is a region called Kenwood, also famous for its wines.  In a vineyard just past the Kunde winery they have planted row after row of red and orange poppies.  Hundreds of them, rows that is.  There are tens of thousands of poppies, perhaps hundreds of thousands.  They stretch from the highway to the hills.

They are meant to evoke remembrance though I drew a blankness, with nothing in particular to recollect or reminisce, no peace to ponder.

The trip was 18 miles total.  Nine arduous miles there and nine easy, fast miles back.  I felt as if my heart would explode on the last portion of the ride there.  About two miles before I made it to these rows of flowers there is an incline that stretches to the horizon.  No hills, no relief - just a long heart-melting incline to my goal.  I felt like my heart was going to detonate.  Not a bad place to die, I guess, if I had wanted to. 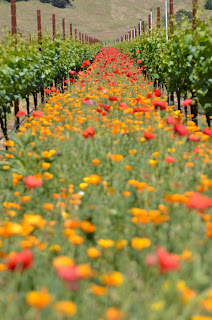