"Drug Addicts Have A Future" A long weekend, an almost forgotten feeling.  For several years now my schedule has been spread out anywhere across all seven days, shifts shifting as needed, often without warning.  Whatever "the needs of the business" were.  A very popular phrase used there.  When you hear it you usually know you're about to get fucked over.

It's amazing, the things we endure.

But today I think we're going to go swimming.  We'll take the boy to a pool and see how he likes the water.  A first.

I remember being "taught" how to swim in Casselberry, FL.  I was pushed into the pool and then kept from the sides.  It was terrifying.  It was at a neighbor's pool, her name was Sally.  She was the mother of two children.  There was no father around that I remember.  She seemed stylish and cool then.  I had a childhood crush on her, I think.  I seem to remember tingly feelings when I thought of her.  Even years later, thinking of her whenever I would climb up a pole and an erection would appear, as if by magic, as if from nowhere.  But it was not from nowhere.  It was from somewhere.  It was from Sally.

That's all that I have to say about childhood erections for today.  Perhaps more on that later.

A friend pulled out her yearbooks from when we were in middle school together the other day.  The Milwee Spartans.  It is difficult to believe at that age that we were capable of being attracted to any of the other students. We were all so hideously awkward.  All of us except Fawn Blankney and a few others.  I forget most of their names now.  But Fawn was hot, she was a "fox"....  I had to stop looking at her picture.  It became uncomfortable for me.

A friend called this morning. He had sent me a book that I haven't had much time to look through.  It is the history of Lexington's "Narco Farm", a prison meant to help give drug addicts "the cure."  The pictures are harrowing.  Desperate individuals - some self admitted, some sentenced - in this facility dedicated to bringing help to individuals trapped in the tightening spirals of drug addiction.  It was opened in 1935 and then became a state prison in 1974.  Morphine, Heroin and Cocaine rank highly among the problems dealt with there.  But it is also famous for being one of the places that the CIA tested LSD on inmates/patients to determine if the drug had any cold war applications.  They were hoping that they could "weaponize" the drug.

"In one test case, inmates were maintained on high doses of barbiturates for a year. In return for cooperation in the drug testing program, inmates were given a number of enticements, including better living accommodations, better food, time off sentences, and a small amount of drugs upon their release which they could take after completing a round of testing." -Wikipedia

William Burroughs, Chet Baker and Leona Helmlsey ("The Queen of Mean") all served time there, at one point or another.  Also, there was Wayne Kramer, the lead guitar player of the MC5.  If beat writing, jazz trumpeting and real estate moguls don't excite your interest then perhaps Detroit proto-punk rockers just might do it.

That it was both a prison and a hospital reflects America's long-standing ambivalence about addiction.

Anyway, flipping through the book is an eye opener.  Plenty of grim images, ironic advertisements and criticisms of the place.  The company Bayer brought heroin into Americans daily lives, naming it thusly in the hopes of reflecting its more heroic properties on the user.  Some people forget.

Coca-Cola, well we all know that...

I was thinking of phrases to counter or respond to Selavy's "post-normal" assertions.  Post-proto was one that I thought was fitting.  We are at the end of all firsts.  The end of all those asserting firsts.  We live in a post-proto world, one in which there will likely never again be a government funded hospital to help those afflicted with the addictions introduced by the very products that were once sold to us.  It will only be prisons from here on out, as far as they eye can see, and as thin, and just as safe, as the tax dollar can possibly stretch.

Oh, Drug Addicts Had A Future... in the proto world. 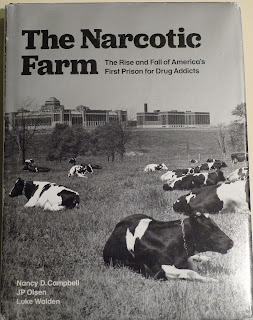