Goodbye is too good a word 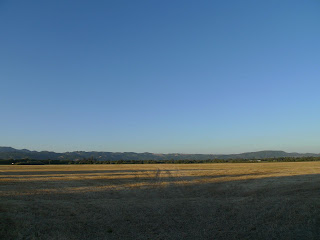 Yesterday was my last day at work.  After putting in my two week notice they fast-tracked me towards the door, sort of.  They gave me the option of finishing out the week, if I chose to.  I agreed to work one more day, they agreed, all was settled.  Then late last night I decided that I would not go in.  There is nothing left there for me.  Goodbyes, handshakes and hugs are not necessary, nor should they be required.  Now there is only an expanse in front of me, perhaps needing to be filled.  Perhaps.  It is challenging, that feeling of openness.  It is an exciting time for me, perhaps soon to be exacting.

I wrote a post late last night that I thankfully did not publish.  It was a screed, filled with some humor and then a fair amount of open bitterness.  An insider's jab at the belly of the beast; a poisoned apple which produced no sleep, no death.  I watched the company go through some important changes from a front-line perspective.  In the trenches, as they say.  When an employee leaves Apple we refer to it as having been "promoted to a customer"... There is a fair amount of honesty to be found there, an unsmiling honesty.

About five and a half years ago I walked out of the front door of my apartment in New York, never having had a real job before*.  As I stepped down off of the steps of my building, heading towards the subway, I put my entire iPod's music library on shuffle and this is the first song that came on.  It is strange how much music can inform your life.  I knew that I would get the job, even after I went to the interview and flubbed it terribly, babbling about my experience as a dj, assuming others would find me interesting, and perhaps valuable as such.  I retained some charm, I guess.  They offered me the job.  It was life-changing in many ways, not all of them good.

But after last night I've decided to focus on the good.

After two years of working there Rachel finally decided she wanted to marry me.  She let me know.  We hadn't talked for months. We had broken up and gotten back together so many times that most of our friends chalked us both up to the "doomed" category. We reigned in the men's, women's and couple's division.  Doomed, doomed, and doomed...  We swept all three rounds, gold medals in each.

We were all wrong, our friends were merely the last to know.

Marriage, a baby, a move to California, a house.  All of it can be traced to working at Apple.  I had never been consistent before.  I had arranged my life to have as little structure as possible, if it can even be called that, arranged.  That all changed.

Now I only hope to find something that I love doing.  I love many things but not all of them easily equate to income, or consistency.  Oh, where is the market for me... where?

I know what you're thinking... God-damn it. Sean Cusick is cool.  Why the fuck does he have Herb Alpert's "Rise" on his iPod?

It's true, I am cool.  When you think soft jazz you always think... Me.

* If you've read this blog for any period of time then you would know that I once worked at Popeyes and I might have mentioned that I managed a record store, a specialty shop that dealt exclusively in electronic dance music.  But none of those were real jobs, meaning one with benefits or any long-term potential whatsoever.  Apple was the first, and so far only, "real" job I've ever had.  So, my opinions about working there are derived from a first-timer's perspective.  Some people have been doing that sort of thing their whole lives so they're quite comfortable with it.  For me, it began as quite a shock.  One day soon I'll tell that story too.