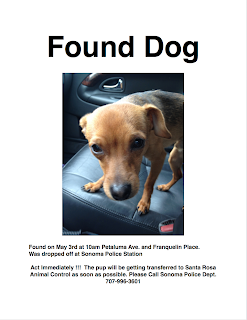 Yes, I know it.  I'm a sucker.  I was driving into San Rafael yesterday to drop off some black and white 35mm film to be processed, something I've been telling myself that I'm going to do for some time now.  I hadn't even made it out of Sonoma when I saw a small dog going underneath a car with its tail pulled between its legs.  I pulled over.  The woman in the car had gotten out and was trying to lure the dog over to her.  Believing myself to be greatly in tune with, and a friend to, all animals - I also gave it a try.

It was at this point the woman told me that she had her dog in the car and couldn't really do anything about the situation.  What did I think that I was going to do?  Fuck.  The little guy was scared.  He wasn't used to being out.  No collar, less than a year old, good teeth and gums, no fleas.  The little guy was scared.  I decided to drive him to the Sonoma Police Station and drop him off.  I put him in the car, moving my 35mm camera out of the way and putting my bag of film canisters on the floor so he could sit on the passenger seat.  That didn't last long.  He was on my lap in no time, still scared, but warming up to me.  I was a savior of sorts.

Once at the police station, a place I fastidiously avoid under normal circumstances, I locked him in the car.  I snapped the picture that you see above before heading in, prepared to have them take over.  Nope.  They explained that the dog was found in the county and not in the city.  They would have to ship him to Santa Rosa animal control.  This sounded ominous.  The Belsen of Sonoma County.  I asked where Pets Lifeline was.  They explained.  I knew exactly where they were describing.  It was a place I was very familiar with from my bike rides.  Off I went.

Once at Pets Lifeline I waited at the vacant front counter for about 5 minutes, pacing back and forth, wanting to just walk in the back and request help.  There was a lost puppy in need.  Finally a woman came to the counter and asked what I needed.  I explained.  Nope.  She said that they didn't have any vacant kennels.  I told her the near death experience of the police station.  She inquired as to who told me that dogs were put to sleep in Santa Rosa.  I explained that that they hadn't actually said that, but it was implicit.  She said no, oh no, that's not what they do around here.  But she went out to the car with me anyway and inspected him.  She agreed with me.  He was a dog that was not meant to be out.  No collar, no tracking device (she had a wand that checked for such things), but in good shape, just a scared little adorable pup.

She claimed to have seen a flea on him, but I never saw it.

Back to the police station I went, to drop him off.  "Shaky" was his name by now, named after Neil Young, and for the other, obvious reason.  He was scared.  A Chihuahua mix of some sort.  A pleasant little guy that didn't deserve to die at the hands of a society that's spun dangerously out of control.  The woman at the front desk listened to me explain that Pets Lifeline was full.  I asked her in very clear terms whether or not they would put the pup down in Santa Rosa if nobody claims him.  She said that they definitely would.  I explained that Pets Lifeline told a different story.  She said that they don't like to send people away thinking that they're bringing dogs to their doom.

But she explained again that because the dog was found just over the city line, and into the county, that she would have to call the county to handle it.  But she was happy to keep the dog at the police station until they arrived.  I got all of the phone numbers I needed, and a verbal promise, from a cop, that they don't put the dogs down immediately.  Nobody was sure how long the waiting period was, but everybody head-noddingly agreed that it was probably about a month.  I left with a verbal promise from a cop, and a silent promise to myself, that this dog would not die, could not die.  By the time I left that police station the dog was practically immortal, frolicking amongst the saints.

Rachel had already blossomed into full mothering mode by this point, even from the great distance of Napa, over mountain and across valley.  She was making arrangements to care for the pup and explaining in rapid texts, one after the other, that we would find a home for the little guy.  Nope.  I had to tell her that the best thing to do was give the rightful owners a chance to retrieve him first.  There could be a little boy or girl at home crying their eyes out that poor little Shaky was gone....

This worked.  Finally something I had done for the day was working.  But then on the way home I imagined all sorts of scenarios in which the rightful owners never did find poor little Shaky, and then trembling in his final moments he was letting out imaginary whimpers in my mind as the poison needle of bureaucracy drew closer.  God-damn it.  I resolved myself to going home, making a flyer, and putting them up near where I found him.  Fuck.

So, after about an hour and a half, going to the print shop with a thumb-drive that was formatted for Mac and not PC, returning home, emailing the flyer to the print shop, returning once more, finally I had the flyers in hand.  I paid for them and a roll of shipping tape.  Putting up flyers is almost a two-man job.  Holding the paper steady while trying to negotiate the roll of tape and its awkward distribution is a frustrating task.  Several flyers were ruined in the process.  It was raining lightly and the paper was already beginning its decline.  After about a half an hour I was finished with my task.  I stopped by the woman's house who had found the little guy with me this morning, gave her a few of the flyers, we shook hands, then I headed home.

I sent the flyer image to Lisa who subsequently posted it on her Facebook page, where it was shared by many in this close-knit community.  The news was spreading fast.  Tragedy would be averted, I told myself.

I called the police station later yesterday.  Nobody had claimed the pup and Santa Rosa had been called. They would be picking the little guy up later in the day or tomorrow, this morning.  When Rachel got home she gave me a look that placed me in league with, or perhaps even beyond, the executioners.  I might as well have been a guard at Auschwitz.  Sean, her eyes seemed to say, doing the "right thing" under these circumstances isn't quite good enough, is it?  I could hear Paul Newman's voice echoing from the Cool-Hand past, "Calling it your job don't make it right, Boss."

Nope.  I suppose it doesn't.

So, any careful reader knows what my day will now include.  I will be tracking Shaky down to save him from certain death, or adoption by loving others.

Say hello to the (temporary) new member of the wandering Cusick pack of trembling gypsies. 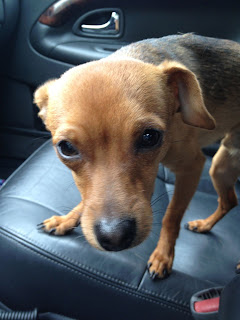