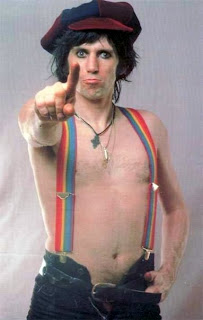 Have any of you read Edgar Allan Poe?  Some of what he wrote predicted a world in which Keith Richards reigned.  He wrote one story in particular called The Tell-Tale Heart.  It is about Keith Richards and his lone, lost, rusty eyeball.

I'm not sure why Keith was trying out for the part of "Mork" in the picture above.  Mork from Ork, that is.  Nanu Nanu, etc.  Luckily Robin Williams landed the part instead of Keith.  Otherwise, we might not have had all of those great Latter-Day Stones albums like Undercover of the Night and Bridges to Babylon.  I'll let you argue amongst yourselves which is the worst of the late, the deceased, period of The Stones' swan-song album era.

It's no small wonder that people thought he was more fucked up than he really was.  Nobody ever got to look him in the eyes and say to him, "Keith, pull yourself together....Look at me, god-damn it! Pay attention, for christ's sake, this is really important."  That was simply never an option with Keith.  I mean, it's not his fault.  Lots of people have an eye that wanders hither or thither, to or fro.

I rarely ever notice.  I don't like to look people in the eyes anyway.  I am afraid of what I might see there.  One eye looking right at me, pleading for understanding - the other meandering, planning its escape.

But in conversation I always remember this picture of Keith Richards.  It helps me.  His right eye seems very serious, and quite intent on making its point.  His left, however, is already looking for its next fix, somewhere off stage, somewhere else.

Anywhere else but here, always just over there, to his left.