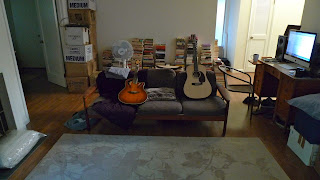 Two friends came in from SF.  There was much drinking the night before last, resulting in no post yesterday.  They showed up with wine.  We drank many bottles, late into the night.  Late for me, that is.  They are from the city and were probably going to bed the earliest they have in months.  Yesterday I was hung-over all day.  At breakfast I purged some stomach acids in the old-fashioned way, then ate my breakfast, which really helped.  Truly, it saved me.

In the afternoon we all three sat on the back patio and played guitars, sometimes together, sometimes meandering into different keys, rhythms, bits of song.  It has been some time since I had played along with others and the feeling was nice.  Acoustic guitars sound marvelous when played together.  One of my friends has bought two guitars that are the type guitars one would hope to keep for life.  Beautiful instruments worth caring for.  It made my Martin look like an old farmer's guitar.  Nobody seemed to even want to touch the Ovation.  We all took turns with the pale instrument, friends that we are.

Occasionally I added a few chords here and there on the baby grand.  But inexperience and a hangover does not good musical accompaniment make.  With a little practice, hopefully, soon.  Today the tips of my fingers on the left hand are sore.  It has been too long since I've played the guitar and my fingers have lost all of their callouses.  It's like doing too many pushups, drunk, after not having worked out in some time.  The flesh reveals how tender it truly is.

We spent the rest of the day over at the garden, sipping beers, chatting about the world's many ills and joys.  The driver responsibly cut himself off a few hours before they knew they would depart.  The beer seemed to help, but also exacted its own price.  I could feel the energy fleeing my body, trying to save itself.

Then they went back to SF and I had some pancetta with porcini and pasta with Matt and Lisa.  It was delicious but I was beaten and drained.  I had a single glass of wine with dinner and all it did was remind me of the danger.  Everything about me felt weary and consumed.  I had little conversation to offer.  Rachel and I had agreed to watch a movie together so I left after dinner.  I practically slept on the short drive home, having no memory of it, though knowing that it somehow happened.

I climbed into bed with my jeans on, certain that I would not be awake for long.  It was still very early, perhaps too early to go to sleep.  The city was just waking up for the night.  Rachel had just put the boy to bed, maybe only an hour and two before.  As we reclined there together watching images move on the screen the moon came up through the trees.  It was just as they said it would be, larger and brighter than normal.  It was our first full moon in our new place together.  Everything is a first now.

The moonlight coming through the trees and into our bedroom was pleasant, even enchanting.  We kept the door to the deck wide open as the moonlit shadows of the trees moved slowly across the room, putting me to sleep, holding us there together as the night passed.