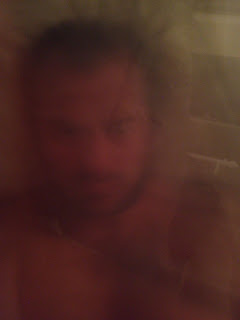 Treading water took its toll.  It took the whole day yesterday.  Slowly, I started to notice a pain running down my left side.  An old pain that had receded recently, one that has been there for years.  It's a pinched nerve, collapsed vertebrae.  I had an MRI done.  It is bad news.  I suppose the "eggbeater" motion of treading water aggravated it.  I spent the day walking increasingly lightly, favoring the right leg, drinking to kill the feeling.

"Of all the things I've lost, it is confidence that I miss the most."

Last night I had a dream.  I was working at Apple, helping a customer.  Things were going along normally but then something went wrong. I suddenly realized that it was my last day.  I told the customer to go fuck themselves, to get out, to get the fuck out.

I awoke pleased with the feeling, but dismayed that I was dreaming about such a thing.  It was I who had got the fuck out.

"And therein lies the origins of religion, perhaps, the plea to expunge the past and past guilt, to miraculously make the future not reliant upon what has come before."

I felt like I was going to start whining about being old again, so I just went jogging.  It has a way of embedding some feelings and erasing others.  There is the initial shock of pain, then recognition.  If you push through there is more pain, of course, but then an occasional sense of triumph in that pain.  It was only 30 minutes, but long enough to have all of the needed sensations.  My knees will hurt tomorrow but for today I am Mercury, or perhaps Atalanta... or Artemis.

It is impossible not to notice the corollaries between the garden that we've planted and Rhys.  There is the new life sprouting out of nothing; out of what seems to be nothing, I should say.  It is an exciting time, to watch life grow around me, to become.  Out of nothing, something.  It reminds one of the important lessons, how fleeting life is, how fragile.  It has its drawbacks, life, yet it somehow retains enough charm to be affirmed over and over again.

It is easier after a jog sometimes, easier than before.