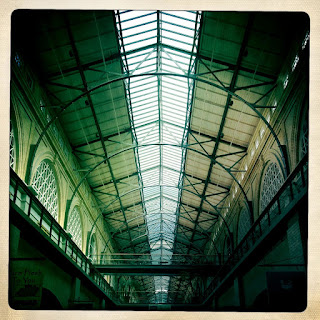 "It is not at all consoling to know that you expected better from a policeman."  - an email from Colin Mason.

I had only adopted the voice of self-righteous indignation because I thought it suited the post yesterday.  It allowed me to laugh along with it a little bit without being too angry.  I don't expect any more out of cops, in fact I always expect quite a bit less.  I was lucky.  I know that things could have been much worse for me.  It's why the conversation changed direction once I got hit.  They gave me a choice and I took it.  When you're surrounded by cops and one of them has already hit you then it can go one of two ways: to get hit even more and almost assuredly arrested, or begin to direct the conversation in such a way that you neither get arrested nor get any further punches, or kicks to the ribs.  I chose the latter and I'm confident that's precisely what they wanted.  It means less work for them and it reinforces the idea that their punching is both effective and perhaps even necessary.

I owe society for my lack of initiative in this matter.

I didn't go to jail.  That was the goal.  I hadn't done anything in violation of the law, but we know that doesn't really matter.  Once a cop starts punching then he's only one more smart-assed remark away from cuffing, and likely more punching, and kicking.  Resisting arrest always gets thrown in as an extra charge, to justify the use of force, and then all is settled.   The judge looks at it in the morning and decides that no matter what you claim, you had to be arrested, you resisted, force had to be used.  You've just increased your troubles and guaranteed them an easier time with it all.  It's only when you're lucky enough that somebody is taking video of the incident that you might have some recourse.  I wasn't going to count on that being the case.  If you've ever been to the tenderloin district of SF then you'd know that not much gets recorded there for your benefit.

Cops punch people all of the time.

That's why it doesn't deeply sadden me when cops get killed.  Truly.  I don't hope for it, but I accept it as "part of the job."  I hope they do too.  When I hear about a cop getting shot "in the line of duty" I shrug.  I don't care about their families or their children.  Or, at least I don't fantasize about their families and the sadness they must be experiencing as my mother used to seemingly love to do.  They are expected to die every now and then.  It's part of what they signed up for.  It is perhaps the only way they know how to deliver any sense of tragedy or valor to their lives.  I wait for the day in which the city has a "review process" in which they could then deny their family any benefits.  It is only a matter of time.  Eventually it will happen.  It must.  Capitalism demands it.  Budget restraints, etc.  It has already happened to everybody else, why not cops?

I don't wish anybody's death, honestly.  I just don't dramatize the death of a cop.  It is what it is.  Cops kill people all of the time.  When they do they get a paid vacation and a release in work load when they come back.  If they exhibit continued troubles afterwards then they can also get re-assigned to an easier patrol or early retirement.  I mean, why not kill when those are the benefits?  There is too little for them to lose.  They all too often shoot and kill without justification.

If you think cops have respect for the law then just watch them interact with poor people.  They would never speak to a rich person, in their own neighborhood, that way.  There would be a report filed and they'd get taken off duty in that area.   It takes a cop killing a poor black kid for him to get re-assigned out of the ghetto.  It's practically a win-win situation for them.

Selavy said, "They're not all bad" in his comments to yesterday's post.  I think he's probably right.  But if I had to make a choice based on assumption I'd lean towards thinking that most of them are not to be trusted and all of them are to be avoided, if not openly feared.  It is what I will be teaching Rhys, once he's old enough to understand.  If cops regularly surrounded and punched women in the head then maybe Rachel would agree with me.

I guess they're just too busy with all of the raping.

When you settle for less than you deserve then you'll get even less than you settled for.  There is no adequate societal apparatus in place to restrain a runaway police force.  Some might say "the law", but consider carefully the use of that law without the police force to keep it in place.  One hand not only washes the other, it's also capable of throwing its own punches.  We live in a society that has two right hands, a pugilist's dream.