Earth Goddess in the back yard 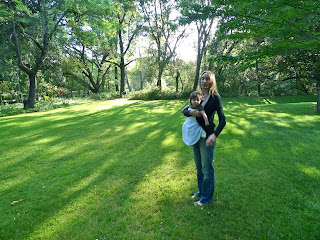 (Rachel, Rhys - closing her eyes in honor of Mother's Day)

I should have qualified.  My post from yesterday was not meant to be quite as specific as it sounded.  It was not meant to be directed at one person, though it was one person's Facebook ranting that triggered it.  At the end of the post I address a few things my brother posted, but that was as specific as I intended to be.  I come across these one-dimensional screeds and I resist them, often line with line.

Rants give rise to ranting.

The main issue I have with so-called "conservative" opinion is that it conveniently seems to forget a few factors that went into forming the nation.  They tend to act as if it was they, and their direct lineage, that created this wonderful hotbed of liberty. Yet they seem to forget many of the most basic truths of liberty and equality in doing so.  Without going into yet another tirade about it I'll simply say that the nation, and its principles, are profoundly liberal values.  They seek to preserve human dignity, not the status quo.

The left sometimes seems to misunderstand the purpose of government, the right seems to misunderstand the purpose of this government's founding doctrine, but you'd never know it listening to either of them.  One would think that they have exclusive access to understanding it, and their foes are merely an impediment to understanding - if you didn't already know better.

Doctrine, no matter how well-written, is a retreat from thought, not an advancement of it.  That is why the framers of The Constitution made it amendable.  The reason the 1st amendment is what it is, and the reason the 10th is what it is, is because they foresaw that they could not foresee.  Much has been said about various amendments that should be repealed.  Even the founding fathers must have thought that if there was one that might need repealing, among the ones that they wrote, it would be the 10th and not the 1st.  Suck on that states' rights revelers....  That's just pure founding wisdom there...  When a state is run by a bunch of bigots and religious fundamentalists then they should be dealt with by bigger ideas and a larger power.  That's why individual states can't amend.  It takes a nation...

I do hope they amend The Constitution to define marriage as the legal and recognized union between two consenting individuals, and nothing less.

So, go ahead... praise the individual states' policy and power concerning marriage rights.  History has a way of dealing with such matters, American history in particular.  A "civil union" differs little from the failed "separate but equal" status that we now realize was abject negligence in both policy and language.  As well as being a miserable failure in serving, and advancing, the noble ideas laid out in the concepts of equality and liberty.

Ok, no more philippic, for now.