The new moon by the light of the sun 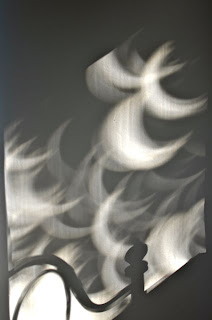 As I've mentioned before, new moons tend to have a special significance for us.  We notice them; the lack of the visible.  They tend to correspond to special events in our lives.  I know that it is only the noticing that brings the significance, but it is there nonetheless, the noticing of a thing.

Yesterday we went to a spa here in Sonoma and had a "date day."  We got massages and lounged in the saunas and hot tubs.  Then we sipped champagne afterwards by the pool.  It was the most time that we had been without Rhys, together.

On the way home we saw a young guy that had set up a makeshift viewer for the solar eclipse.  A solar eclipse can only happen on the day of a new moon*.  So, we watched and marveled as the shadow of the moon overtook the light of the sun.

We went home and prepared dinner.  Rachel called me up to our bedroom and showed me the wall near our bed.  The light coming from the eclipse filtered through the leaves of the trees and made the mosaic that you see above on our wall, flickering gently before us.  We stood there, amazed at what we saw.  Luckily, it occurred to me to get a picture.  Shortly after this shot was taken the wind picked up and blurred the patterns beyond recognition, never to return.

Life can be clustered, confused and crowded with emotions ever stacking - difficult to wade through, daunting.  It is so easy to get tired, to be tired, to remain tired, especially once one is already tired.  Sometimes all that I need is a simple occurrence, something to lift me a little, to transport me momentarily to another realm.  I crave some occasional sense of the magical, some marvelous glimpse into the wonder of the elsewhere, revealing to me once again the dancing spectacle of life before me.  Light casting through the trees, carrying with it one of the simple mysteries of the universe.

* The Mel Gibson film "Apocalypto" was praised for its studied and accurate use of the Mayan language.  I remember several critics falling over themselves to mention it, though I have no idea how they would have possibly known.  It seemed like information that might have been provided to them by the studio as part of their promotional efforts.  There is a scene in the film where the main character is going to be put to death, but a solar eclipse saves him.  Later that same night he is running through the woods and he glances up and sees a full moon.  Those two events are separated by approximately 14 days.  They occur at opposite ends of the lunar cycle.  So, enough for ol' Mel Gibson's respect of things, like astronomy or science.  We know some things that perhaps he doesn't.