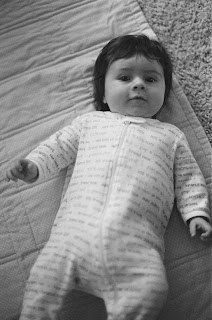 (Burdened with the misfortune of youth)

The president comes out in favor of civil rights...  It will surprise nobody that the Tea Party will never back him up on this, of course.  I love the flatulent rhetoric of that group.  They act as if they are the defenders of The Constitution but fail to grasp the very essence of the doctrine, that the amendments are there to preserve and protect the rights of the individual.  That some are being denied the rights enjoyed by others doesn't seem to phase them too much.  They'll all fall back, gasping, that "It's up to the individual states..!!!"  Sure it is, just like Little Rock was.

It's not just the Tea Party, the entire right will use the prez's stance as a rallying call.  This, more than just about anything I can imagine, will reveal the two-fold lie of the conservative right.  When they jabber about rights they mainly mean their right to deny rights to others, basing their bigotry on a thing they call "sanctity."  I also believe in the sanctity of liberty.  I hope Obama beats Romney, and the coalition of the christian right that he so hopes to appease, like a wayward pack of clumsy mongrels.  I'm actually looking forward to this presidential election now.  I had almost lost interest once old Newt re-strategized.  Newt has enjoyed some-sex on sex on sex on sex marriages.  I'm curious what his stance on marriage overlap is.  What fun.

But ol' Obama, wow...  I guess he's really decided that he's going after the liberal, the youth and the gay vote.  The conservative christians can go fuck themselves.  I've long felt that way but it's astonishing to see a president take the stance in an election year.  He might actually be able to pull off the trick of getting us to believe in "change" again.  It'll be fun to watch, for sure.  I almost want to convince Rachel to get a t.v. in the house.  I want to see more mainstream coverage.  They must be pissing themselves with excitement.  I almost typed excrement.  Almost.

Moving on.  What the fuck is a bunion and how did I get one?  No, I thought I had one.  I was even diagnosed with one by a friend.  But it turned out to just be a bruised bone in my right foot.  I was really about to give up, this time for good.  About once a month or so I wake up with some new hideous malady.  Some go away, some don't.  I don't remember getting injuries in my sleep when I was younger.  Injuries were usually the sole domain of stupidity in action, mine.  Almost every injury I got was self-inflicted and occurred most often through the execution of conscious acts.  Every now and then I would sort of "come-to" and I would be damaged, often in a very visual way, but there were usually others that were happy to tell me what had happened.  Injury served as a temporary reminder not to do certain things, or perhaps to do things better next time, or to try to anyway.  The memory of pain and shame wore off as the body healed.  I would be back to high speed idiocy again with an enthusiasm for ruin that many found breathtaking.

If anybody ever tells me to "grow old gracefully", or that they actually enjoy growing older then I'm just going to respond with, "Yep, everything just keeps getting better and better.  I can't wait to be infirm, complete debilitation should be pleasant, of course, and death is going to be simply fantastic. I am beside myself with anticipation."  What the fuck?  There is nothing about growing old that is preferable.  Nothing.  I've heard people talk about maturity and making better decisions and all of that nonsense.   The best times of my life were when I was making marvelous mistakes, not when I was slowly avoiding them.  Making grand mistakes is the only way to live.  People tell me about serenity and inner-peace... all of which sounds miserable and dull.  I question how these people live with themselves.  Truly.  How boring must their dreams be.  I've heard some talk about training themselves to meditate in their dreams.  At some point peacefulness resembles death, and not the victory of death - the release from pain and entering the cosmos once again - but just eternal dullness, floating by yourself in a sea of useless self.

I am even boring myself writing about it.

Being old is disgusting.  Meditating is a form of practicing how not to live.  Dreams should be wild and weird and enjoyed as they are, whenever possible.  As a counterpoint, I'm going to try to start exhibiting more obsessions and compulsions in my dreams.  Or, maybe I'll just try to go on manic shopping sprees in my dreams.  I'll pursue any distraction, no matter how odd or neurotic.  Seems easy enough, all I have to do is stay asleep just a few seconds longer.