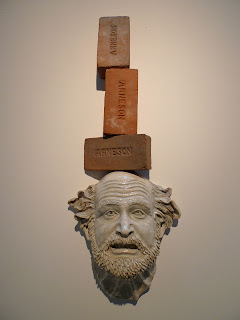 The clock ticks away at work.  I can almost hear the slow tapping in the distance, the percussive clicks approaching.  The job has become immensely easier than it was before, giving me some insight into the subjective nature of its difficulties.  It seems that nothing can quite touch me there now.  No interaction can cause me the stress that it once did, daily.  It's as if I'm wading through a recurring subconscious ordeal of mine, but that I am somehow not the one doing the dreaming any longer.   The unpleasantness of it all is around me, rather than in me.

Why can't they make a drug that could provide this feeling each day?  I've tried xanax, many times.  It works but it can not be used the way that I would like to, 5 days a week without any negative effects, doubling up on weekends for recreation.  I suppose any drug that would make you experience life so objectively would have its drawbacks.  I used to eat acid a few times a week and I started to notice that the non-affected world had lost some of its sheen, its natural glow began to diminish and fade.  It gives one insight into the many paths to madness.

None of it is worth it, drugs, when all is said and done.  Because the saying and the doing becomes dull repetition, an empty ritual of self, the practice of intake rather than an act of expression.  I have bored of drugs, or at least regular drug intake.  The occasional reminisce suffices.

I've sometimes wondered what it must be like to die.  Being an imaginative sort I practice the fantasy in a variety of ways.  I imagine the walk up the steps to the scaffold, that time must slow down so as to be elongated and otherworldly, changing its usual forward march into an amorphous sideways billowing, rippling outwards as curtains in the wind; all sounds must recede into near total silence.  Objects distant might seem precious and unattainable as the impending event is both recognized and denied by the mind, even as you move towards it, with all impressions expanding even as you diminish towards the one.  Thoughts must take flight in the most opposite of directions.  There would be a scattering of faculties and the senses would become engaged on many levels, flooding the mind with perceptions and endorphins.  Life must become quite analgesic in its final moments, when ended this way.

The acute dread and horror upon seeing the tower of the guillotine, and the angled metal blade glistening, must be enormous.  I envision the act of the sharpening, the occasional mishap, the forfeited limbs of mistake - the stray fingers, hands, or worse.  The price of maintenance, the hands of time.

It has been said that Marie Antoinette accidentally stepped on the executioner's foot in her final bewildered daze, she then stepped back and apologized as she was led towards the terror, the crowd reeling with excitement.

Georges Danton said, "Don't forget to show my head to the people. It's well worth seeing."

I would likely be in a spasmodic state, excrement streaming down the inside of my pants.  Nobody would want to touch me, they would force me towards eternity with sharpened sticks, disgusted at my shame, not wanting to participate in it in any way.  "Some people simply don't know how to die, do they?"  I would hope that they would have the decency to not turn my head around and show me that I had fragranced myself this way.  To be disembodied and fouled would be excessive punishment, I would think.

I suppose they could make matters much worse for me if they chose to, even then.  Barbarians, each of us.

But they've done away with the guillotine, in the early 80's, if I remember correctly.  It would take a very resourceful murderer with specific ambitions for me to die in that way now.  I have no idea where such a person would even get a crowd under those conditions.  But it is still something to consider from time to time.  Young boys fantasize about these things when they are taught about them, then often for years afterwards.  I suppose that I've never quite grown up.  Not growing up is sometimes much easier than going to work.  The benefits are amazing but the pay is shit.