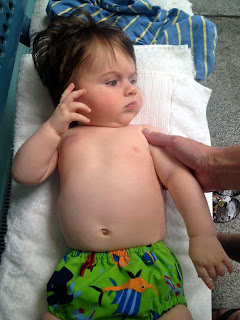 (Looking in the direction of the pool)

I've been trying to exercise every day, for at least 30 minutes.  I've been on a good streak since I left Apple.  I've somehow found the time each day to do some light cardio, occasionally more.  I thought that I wasn't going to fit it in yesterday, but then we took Rhys to a local pool where he had his first "swim" ever.  His proto-swim.  He didn't actually paddle, of course.  We just held him near us in the water, then occasionally holding him out at arm's length into the water.

His joy was evident, palpable even.

But once we were in the water for 10 minutes or so there wasn't much more to be excited about.  I decided to tread water for 30 minutes, since we were there, and I hadn't exercised yet.  I hadn't thought that I would have a near death experience in doing so.

I employed the eggbeater kick, keeping my ears above the water for most of the time.  The first 10 minutes went pretty easily, the next 10 I started to feel like I was working (watching the clock move slower and slower, doing an invisible dance), the last 10 was an all out desperate dash to the motionless finish line.  No, I kid.  It was actually much easier than I remember it being, treading water.  I assumed it was because I've lost some muscle mass and gained some more buoyant flesh.  Fat.

But about 2-3 minutes shy of 30 I stopped paying attention and I inadvertently swallowed a mouthful of water.  Well, about half of a mouthful, but enough to be drowned.  My body reacted before I even knew what was happening.  It all came out in a fine mist, a steady spray that was jettisoned from my throat before it could hit my lungs.  I know that it doesn't take very much water to be drowned.  It is something I repeated as a mantra when I was a child, so I know that it must be true.  But I also know that being in water when you ingest water greatly increases the likelihood of said drowning.

I can be morbid.  I imagined my lifeless body sinking to the bottom, unable to hear the screams above, the cries for help, the horror.  I didn't imagine this for long though.  I was still in the water, kicking for my life.  I had a minute or two left to go.  Safety was only an arm's length, and 120 seconds, away.

Having a child has made it a little bit easier to remember things about my own childhood.  For many years there was an ever increasing loss, a darkness of memory, descending on my early years as a curtain from the past.  Now, just barely, I've been able to re-access some of those memories.  Miniature glimpses are making their way back through to the light, leaping in, unexpected.  To my delight they're not all bad.
There must be a chemical that gets released, a hormone, that grants one access to their own lost memories upon the birth of a child.  The body is filled with regulatory substances that stimulate specific cells and tissue.  It is how the mind remembers how to swim.  The miniature electro-chemical lightning strike that stimulates a long unused motion and its memory.