Victory in the South 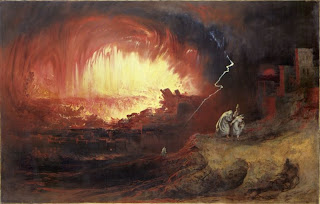 
Arguing with people is exhausting. The only reason I do it is because I enjoy it, I guess. It's not pleasure, but there is a sense of engagement. Then afterwards there comes the question, why? To what purpose am I spending life's energies?

I should probably teach myself to abstain. If not teach, practice. I wonder if Jesus got in fights with other kids when he was younger. He must have. Looking for a shot at the title, then wanting to defend his thrown, The Pummeler of Palestine.

It's not as if he could take the shape of a human and live to become a mortal man, flesh and bones, and not experience childhood as others did. Jesus grew pubic hair. He eventually developed into becoming a messiah, like Muhammad Ali, but thousands of years ago. If this were not true then there would be more significant stories between his birth and his preaching years. The apostles were terrible biographers. One suspects they had not read the Greeks. Plutarch was a contemporary. Who knows, Diogenes might have lifted a few ideas from them. There is no reliable record of this however.

World champion messiah is an idea that might have occurred to him in his twenties, that he had a shot, the field was open, but he began in earnest at thirty years of age, approx. The sermon on the mount being his first major title victory. Three years later his career was over, cut short by a Roman with a Jewish manager.  He's like a UFC messiah.


See? I sat down to write a brief meditation on restraint, and this is the result I get. Perhaps there is something wrong with my soul. It has been recycled too many times. It's on its last journey. I actually like Jesus, and guns, all of it. But I can't find a way to get along with either of those two groups, even if I try to agree with them. The gun crowd or the christians, both find me worthy of condemnation, if not worse. If you combine the two, the temptation is too great for me.

Jesus was very pro-gun, everybody knows that. It is one of his central messages. To properly fire a rifle one often has their cheek turned. It is part of the bladed-off stance of beginner christians. Experienced christians fire in a squared-off stance, even though Christ instructs them not to. When I am firing a gun of any kind, especially at an animal, I have an internal mantra that helps me affix a target, "My God is an angry God... My GOD is an ANGRY GOD..."

It was not possible that the Boy Jesus got everything about gun safety right. We know that now. He gave us a light from which we could follow. It was with this type of training that the pre-christian christians were able to finally take Sodom.