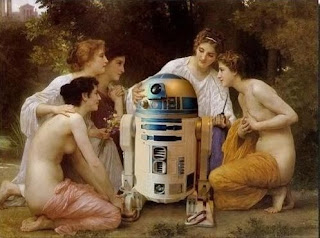 I guess I didn't renounce wickedness quite enough... I will try again, sometime soon.

I have begun working from home, which is nice. It saves me an enormous amount of time commuting, as well as money. Though the savings on money could not fairly be construed as "enormous," still it is money. Any amount of money begins to seem significant when gaining it is how you disburse all of your your time. Though we are told to spend money as if it doesn't matter. Otherwise, we would be trapped by it. The logic never quite holds, does it... It is what working for a living does to a person. One must exclusively embrace the new logic. What did old Thomas Stearns say about it, "And when I am formulated, sprawling on a pin, When I am pinned and wriggling on the wall, Then how should I begin..."

My point being, working from home has saved me quite a bit of time - as little as two and a half hours, sometimes as much as four, each day.  I've dedicated this time to reading, mostly. I've been reading about a hundred pages a day. I have receded back towards the private life. Now, all that is needed, is a figurative room of one's own, if not a literal one.

We've begun getting the New Yorker magazine again. It is something, at least. The articles are okay, but I just simply love the pictures. Who knows, soon I will be one of those people who starts going magazine crazy and gets subscriptions to Harper's, The Atlantic, Vanity Fair, etc. Are all of those still in business, or has the iPod killed them also?

I finally had to eat, small meals. The feelings of hunger were making me tetchy. It is nearly impossible to interact with others on a completely empty stomach. You see the world for what it is, without the veil of food obscuring your sight. It is a hideous vision: people. They all begin to sound as if they are shrieking. I am tempted to act somewhat as Bartleby and respond to all inquiries with, "Computer says no...."

Hmmm, I just realized, there's some more books that are missing. Moby Dick, and the collected writings of Melville. Kant's Critique of Pure Reason is gone too. Cormac McCarthy's No Country for Old Men. There is a box or two hidden around here somewhere, among all the other boxes, awaiting my discovery. Either that or the meth-heads we paid to move our stuff decided that a few of them should get chucked into the dumpster to keep things fun and interesting. It certainly seems possible.

Somehow all of Frank Herbert's Dune series made it through the transition from childhood until now, from Florida through New York to California, but Moby Dick gets flushed into a landfill by a crackhead whose lighter finger was starting to itch. If I could just find The Lord of the Rings trilogy then I'd be happy as a dragon in a dungeon.