In the mighty footsteps of Christ 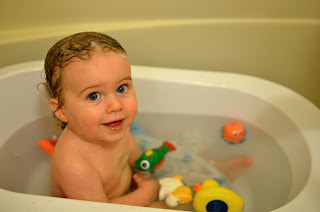 It is done. Rhys has entered the fold.

I joke about this baptism stuff. It is irrelevant to me beyond a source of mild humor. But the day before his first birthday, yesterday, he started to walk. He had taken steps before. But yesterday he actually began to put steps in front of one another and move from one place to another within the house. He took as many as seven in a row. The most steps he had taken before, and usually between one place where he could "cruise" to another, was maybe three. So, the magic of baptism really worked out for him. The power of Christ compelled him, I guess.

Coincidentally, yesterday after blaspheming the holy spirit, I wasn't able to post to Facebook. I tried five or six times. It just kept giving me an error and I couldn't see the post on my page. I couldn't see any posts on my page from 2013. I had thought that it didn't post at all. Finally, somebody posted on my wall, asking me why I took away their privileges to comment on posts. I hadn't. But apparently they could see my post and I could only see their's in the "notifications" section. So, then they commented on the blog post I had made and that was the only way that I could get to that, but there were no links for me to comment. Strange behavior. Holy Voodoo.

Facebook has become the battleground of a spiritual war.

I kid, but there are many on Facebook that treat this as truth. I get it. They feel a responsibility to help save lost souls. It is a benevolent impulse. They don't want anybody they know, or love, to burn in the lake of fire for all of eternity. The message is a little bit confusing: Come to my loving god, through the horrific sacrifice of his only son, Jesus, so that you don't spend the everlasting in torment that my father has already promised that most of you will. He loves you so much that he sent his son to earth to be slaughtered to appease him. There was no other way. He is the Almighty, watch out for Satan...

It is an odd view of the cosmos, to be sure. I've tried to understand it. I think it functions best when people aren't too insistent on the details. Jesus spoke beautifully at times. He seems to have been on bath salts for the book of Revelations, but he had been through a lot, one can not rightly deny him an occasional bender.

Ok, enough about Christ and christians.

Our house is full with guests again. We have a semi-complete zoo here. Two dogs, two cats (one indoor, one outdoor), two sisters, a man, a woman, a child, the occasional ant. The place is full.

Having a child gives relatives the go-ahead to perpetually reduce the amount of living space you have. Every room becomes an additional playroom, filled with the largest gifts available. Every visit reduces our accessible floor space by about 100 square feet or more. I'm longing for the luxuriant old days in NYC when I had 300 square feet to myself. I mean, what is it? That impulse to occupy somebody else's house with large objects whose purpose it is to presumably make a child happy. He has his own room. He doesn't pay any rent. He sort of has it made here already.

I try to imagine a situation where I would go to somebody's house and unbox a game of Twister, spreading it out on the floor and eating up their living room with it. Smiling, taking pictures of what I had done and how happy it made me, encouraging everybody to play along.  Then spreading the game pieces into the kitchen and up the stairs, for later joy. Expecting it all to stay there from here on out. It would be somewhat of a family insult if we ever came over again and any of it had been put away.

It's absurd. We're going to have to buy a storage unit just to house the gifts that we can't keep at our place. Of course, I'm not allowed to say anything about it, except on here, in private with just you guys listening. The one thing that can not ever be questioned is why we work to pay our mortgage. Is it so that we have a comfortable house to live in, or so that there will always be a place to shelter even more toys?

I only want one toy, and I promise to keep it off the floor.