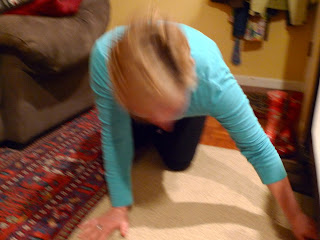 The Norovirus is closing in on me. I escaped it as it swept through our house, afflicting every person here but me. Yesterday, I innocently stopped to chat with a friend. She seemed fine and healthy. We spoke in the kitchen together for about half an hour. She poured a beer into a glass for me; a nice delicious Guinness from a can, the bubbles wonderfully making their way to the top of the glass through the mysterious and murky goodness. Now all I can think of are those invisible little barbarians crawling all over the outside of it, trying to get at my beer, hoping to find a way into my intestines, to turn my body into their own personal water park.

At the time I had no suspicions, neither had she. Her body was probably already teeming with the vicious little caliciviridae. They had big plans for her. It makes no sense, how undetected they can be while engaging in such heavy construction. She was pleasant and chatty, the very image of health. But last night Rachel got an emergency call to come over and help her with the baby. She had been struck. Now... not even Facebook can help her.

Then, I did remember at one point in our conversation she had accidentally sneezed into my esophagus. I thought nothing of it at the time, it seemed inconsequential. She is into eastern philosophies and often her behavior is both varied and inexplicable. I thought it was a blessing of some kind, though it was actually just an act of pure coincidence. I was yawning while she just happened to be sneezing. It was a trophy sneeze, truly. Little bits of mucous and saliva irrigated my eyes, ears, nose and throat. My head was tilted slightly back for the yawn and my nasal passageway was aligned perfectly, such that when I next swallowed I felt an errant bit of mucous make its way all the way to the back of my throat only to continue its journey south towards my stomach, soon to be joy riding out of my anus. One eye was nearly sealed shut with a piece the size of multi-vitamin. I thought nothing of it at the time, but now the memory comes back to haunt me. It was as if I had generously applied hair gel. It took two towels to dry off.

When it was all over we both bowed lightly at one another and gave a valediction that I have still yet to discover the true meaning of.