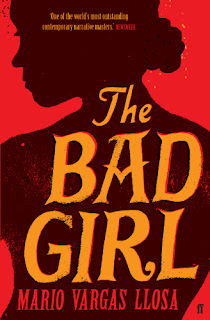 Finished the book by Mario Vargas Llosa, The Bad Girl. It was not very good. He describes all things with the same tone, using almost the same words each time as well. The scenes involving sex were dull. One could hear him thinking the book through, having to write a section about this now, because it is what must happen next to get where he needs to be. Falsely thinking that traveling forward through time and exotic locale will help propel the narrative, though not having a very good grasp of either (He had a character die of Aids in 1973-74, right after the "Swinging" years in London). All things happen with predictable coincidence as well, even moral lessons.

It became impossible to care about any of the characters. When the main female character, the bad girl, dies at the end it doesn't really matter and you knew that it was going to happen. In death, nothing changed. It's difficult to express what the author was even trying to say- even more for him than for us. "Poverty is bad," maybe.

I read in a online description of the book that it was about obsession, though it was not written obsessively. It was as if somebody who had never felt its impulses decided that they would write about it. I must assume that the author's Nobel Prize rested upon other works.

Oh well. There is more to say, I suppose, though hopefully by somebody else.

My life has its own difficulties, they are many.