A severe case of jet-lag 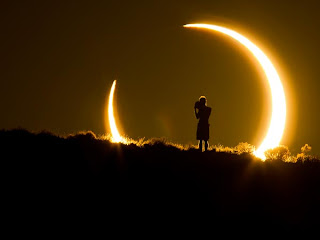 Yesterday morning I left the house very early, to get some breakfast. Just before the sun came up the slender crescent moon was visible, rising in advance of the sun, soon to disappear, but delicate in what seemed to be an unshared moment between us.

I like the mornings, the occasional privacy of them. I like sitting here, generating bizarre confessions to this screen, leaving postcards from my life for my friends to read. It often makes me giggle, how fucked up I am.

Today is the new moon, an occurrence that often coincides with significant events for Rachel and I. If the popular legend of the full moon were true then today should be a pretty quiet day. We'll see.

The thought of the unseen moon crossing the sky in relative proximity to the sun all day long intrigues me. I wonder where... It's up there, as round as ever, slowly making its way across, unseen by all.  There is no difference between it and the clear blue sky that surrounds it. You can try and try but you will never find it. The moon is the first truly stealth galactic event that man became aware of. That's science.

Time zones are meaningless at the North Pole. When you can see the moon from that spot at all, depending on the season, you get to see it for about two weeks straight, uninterrupted, going through half of its phases. It will cross the sky very slowly, but always visible. It will hang near the horizon, making a slow arc from one part of the horizon to another. Then it will disappear for about two weeks. To see every phase of the moon you would have to stay there for a full year.

When there, at the North Pole, you are at the convergence of each and every possible hour of the day. Day and night are only meaningful based on tilt, though entirely meaningful then, each one lasting six months. You would have to take several steps in one direction or another before the 24 different zones would separate enough for you to be standing in a particular hour. You could spread your feet at the exact pole and be standing across 12 different time zones at once. You could turn around, do the same and cover the other 12. Yet another dream of mine... to once and for all conquer time in this way. To make my watch meaningless. I would bury it there, if they would let me. I would also piss on this spot if it would not mean losing my best friend to the gangrenous cold. There are no such distinctions as gender at those temperatures. A man's genitals become entirely indistinguishable from a woman's, even to doctors. Though I do harbor some superior pride in the size of my clitoris, comparatively.

So, there is also that to consider.

If you were to walk in a wide circle around the exact pole then you would suffer terrible, terrible jet lag.  No, wait, that can't be right. Jet-lag gets worse and worse towards the equator though more difficult to effectively accomplish. It takes longer to pass through each time zone, which actually helps you suffer less. Jet-lag strikes the hardest when arriving due east or west from where you departed, midway between the equator and the North Pole, at the 45th parallel. This should throw off your sense of time the most significantly, and affect your body's ability to adapt the most noticeably. Again, I am filled with dreams of breaking the world's current jet-lag records, but to do so with a woman's genitals and claim it as a victory for all women, everywhere. Such is my commitment to feminism.

I am currently writing a book on my experiences. It will be titled, "Holy Crap, that chick has an enormous clit....!!!"

The season will also bear significance on jet-lag, as the tilting of the arc is in relation to the sun, the length of the day, as well as the amount of time spent in dusk or dawn. These all affect the amount of certain chemicals your body produces, melatonin among them, which helps to adjust your body-clock to produce a sense of day and night within the subconscious. The circadian rhythms are nothing to toy with. I fiddled with mine once and look at what happened to me. It's all in the book.

Once I traveled from Barcelona to New York, to Atlanta, to Tokyo. All in two days. They are only 8 hours apart in time zones, but I took the 16 time zone route, taking a luxurious 48 hours to do so. It was like a ride on the Orient Express, back when you were allowed to say words like Orient, and Constantinople. The strangest thing was making the conversion from being a Spaniard to an American to becoming Japanese, all so quickly, to say nothing of the mystery of the Japanese clitoris.

I envision strange sexual occurrences in the word Constantinople, if I stare at the word long enough, letting my eyes linger over letters where they don't belong.

Do you see them there too?