The known quality of Wusthof 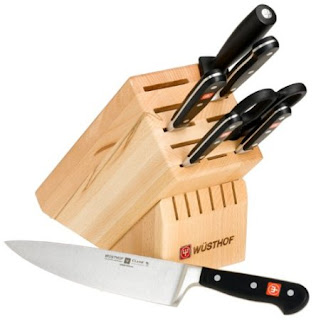 After much negotiating with Amazon - monies being refunded and then automatically re-withdrawn, boxes getting shipped and then shipped back, phones calls, emails, conversations, etc. - we finally got the Christmas present that I bought for Rachel. The Wusthof Classic 8-piece set. I'm told that they are one of the standards of high quality knives, if not the accepted standard. There are, of course, nicer knives out there, but these are considered the most that any home would ever need in terms of quality. Amazon suggest that if treated properly they will last a lifetime. No mention in the ad about them occasionally being used to end a lifetime. Wouldn't that be an interesting side note on Amazon, "Famous murders committed with these very knives:" For their more crime-minded customers.

One of my favorite Hitchcock movies is "Shadow of a Doubt." The father and his friend spend much of the film discussing how someone could go about committing a murder and how they might possibly be caught, while all the while his daughter is developing a deep infatuation with his murderer brother-in-law, her uncle, whom the others are completely oblivious to. She eventually marries the very able detective who solves the case, but not after a long suggestive tryst with the dangerous and fascinating Mr. Cain. And she, hardly past being a mere child...

The knives do seem nice. I don't know very much about cutlery. I had thought that when I picked them up I would immediately recognize their quality over that which I was used to. Nope, not really. I only know that it is preferable to have the blade made from tip to the back of the handle with a single piece of steel. Tang, it's called. I learned that on wikipedia a day or two before Christmas. They seem that they are a quality set, but I found no special bond of recognition with the workmanship that went into making them. They just seemed like knives to me. But I am a dolt about such things. The extent of my relationship with knives begins and ends with eating a steak in a usually civil manner.

This is what my life has become... reporting on a recently purchased knife set. I had said about a year and a half ago that once I moved to Sonoma then this site would become a review page for power tools. I'm not far off.

We also got a Toro leaf blower, rated #1 in its class.

There is an interesting passage in an otherwise mediocre book concerning the recognition of quality:

"He noted that although you normally associate Quality with objects, feelings of Quality sometimes occur without any object at all.  This is what led him at first to think that maybe Quality is all subjective. But subjective pleasure wasn't what he meant by Quality either.  Quality decreases subjectivity. Quality takes you out of yourself, makes you aware of the world around you. Quality is opposed to subjectivity.

I don't know how much thought passed before he arrived at this, but eventually he saw that Quality couldn't be independently related with either the subject or the object but could be found only in the relationship of the two with each other.  It is the point at which subject and object meet.

Quality is not a thing. It is an event.

It is the event at which the subject becomes aware of the object.

And because without objects there can be no subject - because the objects create the subject's awareness of himself - Quality is the event at which awareness of both subjects and objects is made possible.

Now he knew it was coming.

Now he had the whole damned evil dilemma by the throat.  The dilemma all the time had this unseen vile presumption in it, for which there was no logical justification, that Quality was the effect of subjects and objects.  It was not! He brought out his knife.

"The sum of quality," he wrote, "does not revolve around the subjects and objects of our existence.  It does not just passively illuminate them.  It is not subordinate to them in any way.  It has created them. They are subordinate to it!"

- Robert M. Pirsig, "Zen and the Art of Motorcycle Maintenance"

For anybody that has ever read that book and was touched by the special love that the father had for his son, and the care and consideration he put into trying to explain his version of the world to him, there is an afterword to the story. The book was partially based on his actual experiences with his son. In a reprinting of the book, one which I picked up after having given my original copy away, he relays that his son was stabbed to death two weeks before his 23rd birthday. His son had left the Zen Center in SF and was walking along the Haight when there was an attempted robbery. When the two thieves found no money in his pockets they stabbed him in the chest. He wandered about half a block, leaning against a streetlamp, then collapsed, dying there on the street only minutes afterwards, alone and with no one helping him.

Each heart has only a certain capacity for pain, beyond that I do not know how people go on living. Mostly out of the inertia that life is. Time passes, but we cease to be in it in any meaningful way any longer. But rather it is just the slipstream pulling us to where we are all bound to be going, agreed upon by life as confirmed by death. Some believe the course draws us all towards the ones we have lost, rejoined in some heavenly hereafter, others surmise that the passing of time pulls us gradually further from those lives and love lost, dimming the memories in the currents as the stream of time carries us all along, then away.