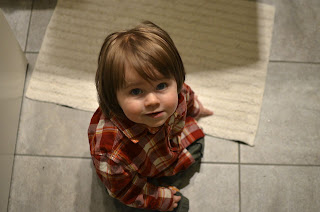 I shouldn't write when I'm angry.

Nobody likes to hear their baby cry. Rhys has begun waking up crying. Not whining himself awake, as he had before, but crying. Wailing. The impulse is to go and comfort him, and it's a strong one. This is perhaps even more distressing for a parent than it is for the boy. But there is this person there in the room who keeps trying to give me errands to do to get me away from my own child, as if I'm a second-class parent, as if there is only one who is able to comfort the child. The willingness of love is shrugged away, given a chore instead of a chance.

That being said, I really shouldn't write when I'm angry.

There is so much more to say in this regard, but there is an honesty limit that should be observed, to maintain a sense of decorum. Though I'm quite tired of being told what I should be doing to make this situation better, by a handful of caring people. So far, most every suggestion has been one that makes me a subservient parent, both in subtle and not-so-subtle ways. They implore me to "help," as if that's the only answer, the only possible resolution to an imagined crisis. As if increased action on my part will resolve all that matters.

My question is simple: How will increased action on my part help the child? That would assume that the child is currently being neglected.

If your immediate answer is, "Well, you could help the mother!!!" Then this post is for you...

As for those that have offered their helpful advice - I don't think that any of them realize that I will never argue for their equality again, though they might be getting an idea right about now. Little matter what unfairness they may become victim to in life, they have proven that they believe me to be unequal, scant to the task of parenting. Now those beliefs must be given adequate space to grow. Anything less would be unfair to them. It would violate their sense of moral propriety, to counter their illusions. The seed has been planted and nurtured, now the crop must either nourish or perish.

To be overbearing and then raise the question of why I don't resemble that same behavior more fully is a situation in which there is no adequate escape or answer. One can not easily argue against a parent's form of love, mine here included. But by doing little or nothing in this regard a perception develops that is inaccurate, it is bloated by one side. It relies on the idea of error for meaning rather than the imbalance.

The behavior of retreat is everywhere I look, and just as universally denounced. As if this is "just how they are..." Confusing the reaction for the action. It leaves the impression that the contribution of healthy love is somehow inadequate, and that only the autocratic love of one is to be held in any regard whatsoever.

Dictating responsibilities is not sharing them.

Just imagine if somebody acted that way...