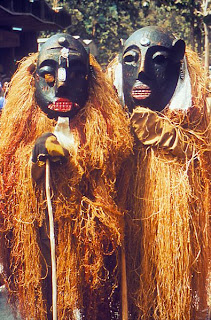 (cluttered theologians)
I'm told that we will go baptize our son today. A christening it's called by some. We're going to let the Methodists do it because Rachel likes their methods, of course. It just feels right, it seems sensible. He has no say in the matter; a helpless infant surrounded by those who wish for him to one day believe. I will have fun, of course. These types of events really roll out the waterheads. I hope somebody cries. I mean, other than me this time.
To immerse him in god's grace and wash him of all his worldly sins... I don't mind that they apply water to him to achieve this goal, and mumble their ordered gibberish. Who knows, maybe the holy spirit will descend upon us and put on a magic show. The pews will start floating, there will be a spinning ghost in the room. I hope they submerge him, seems like the only sure way to really get the sin off. An unchaste pastor that my wife has only met once before holding our baby under water for the purpose of religious conversion. What could possibly go wrong?
I think that speaking ill of the holy spirit is the one unforgivable sin, one that I have just committed above, again. It is the eternal voodoo. Not even a baptism can save my wretched soul now. I think that I can still accept Christ's love, but only with mitigated results. I will have some answering to do when I come face to face with the other god division. The quarterback on high who calls all the shots for THE BIG THREE.
If we could baptize him in his own afterbirth then I would be a little bit more into it. I could then make the contagious magical leap, a touch of supernatural tea and sympathy. Little does Rachel know that because I am not putting up a fight to this important spiritual event that the next full moon I will demand to take him to see a witch doctor to have his blood let, to allow any remaining sin to flow out of him. Rusty needles, a vat of simmering chicken blood,  howling in the distance, three-legged marmots, etc.
A friend recently posted that while he was relaying the events of Creation to his child he was spirituality renewed by his 5-7 year old son's somewhat antiseptic theological stance, refreshing in its ease and straightforwardness. It struck me as odd, to examine a child's theology and praise it with admiration for its simplicity. When Jesus instructed his followers to be as little children to get into heaven, do you suppose he meant that we should try to remain without developed intellectual curiosity? Or do you suppose he meant that sometimes it's just okay to wet the bed, whenever the spirit strikes?
.
Posted by Sean Q6 at 7:21 AM