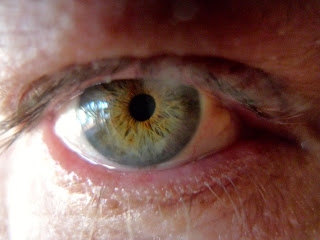 The picture above is of an old man's eye, I forget his name. He is a regular at the pub that I frequent, oft too frequently. You would never believe this was his eye if you had met him there, or anywhere else. I had been drinking, as one does, and asked him if I could take a picture of his eye. This is the result. Though I have taken several pictures like this before, this one really shocked me.

I went with Rachel to meet a Methodist pastor. She is eager to get Rhys baptized this Sunday because her mother and her mother's sister will be here in town. The pastor spoke of the significance of baptism and how it is a promise to raise the child within the church. Rachel nodded approvingly, eager to have him agree that this is what is best, and what should happen this Sunday. I neglected to mention that her eagerness had an as yet unmentioned source. I was there to be quiet, nothing more.

He read from the hymnal, the words that would be spoken before we committed ourselves to renouncing wickedness for good, once and for all, hocus pocus...

It all sounded marginally acceptable. I questioned my atheism for a quiet moment, but then determined that I was just hungry. I am, after all, on day 2 of my hunger strike and not in a fortified state of mind. That is when the Christians can get you, when you're hungry.

Not eating today has reminded of twice reading the book "Hunger" by Knut Hamsun. It is a fascinating tale of self-invention and dissolution. I don't think I've ever been quite as entertained at one character's ability to justify their own neurosis to themselves so convincingly. The pure delight with which the central character pursues his own misguided impulses is like no other book I've ever read. It falls just short of Kafka in its inwardly directed otherworldliness, though there is nothing fantastical in its telling. I've only ever read the Robert Bly translation, which apparently missed the shifting past and present tenses of the novel, adding to the febrile neurotic tone.

In truth the character is much closer to Dostoevesky's Raskolnikov, but without the criminality.

Of that main character Isaac Bashevis Singer says in his introduction, "He is constantly saved by some temporary deliverance."

And of the author, "To Hamsun, man was just a chain of moods that kept constantly changing, often without a trace of consistency. Man was therefore, as strong as his weakest mood. The hero of Hunger doubted the existence of God, yet he prayed to him. He loved, but he belittled this love and all that it stood for. He strove for artistic revelation, yet wasn't really serious in his approach to art. Doubt, not only the philosophical but the mundane, found in Hamsun its narrator par excellence."

Obviously I have pulled the book from the shelf and am flipping through it.

For a time in NYC, I left it in my bathroom to read when the urge struck me. I had a party at my apartment in which many of the "club crowd" came over. Towards the end of the party I saw one friend, an attractive and mysteriously toned young woman, looking at it like it was an unflushed turd. Her brow was furrowed and she glanced up at me, worried and curious at its presence.

She had on that look, the determined renunciation of wickedness.