Where were you when George was reincarnated...? 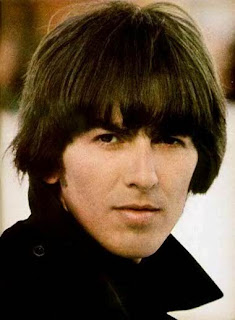 November 29, 2001.  NYC.  I have probably told this story before here.  I can't remember any more.  I was relaying it to a friend last night in incoherent bits and slurred pieces, so I will re-tell it here again.  I will try to augment the story as best as I can to make it more interesting, or less believable.  We'll call it a reincarnation of its former self.

It might have been, and probably was, the night after the 29th, the Friday after George Harrison died, the 30th.  Let's go with Friday. It makes more sense considering how many people were in the park.

So, I have not always dated Rachel.  Our relationship has had other relationships variously interspersed with ours along the way.  One of mine lasted almost two years.  This is a story from that time period.  Well, in truth I have no real way of knowing when that relationship was ending.  Her sex life became more active than mine at some unknown time before the end.  It was heartbreaking, a betrayal from which I have never fully recovered.  That is perhaps a story for another time.

All that being said, we went to see a play.  It was a remake of a Chekhov play.  Unkle Vanya.  But it was billed and told as "Aunt Vanya."  The main character's gender was reversed for reasons I never quite understood then, and don't care to examine or research further now.  I'm sure it was meant to have some pondering feminist significance.

The play was quite enjoyable.  I remember liking it quite a lot and found it entertaining and reasonably well done.  It was on the Upper West Side.  Afterwards we walked along Broadway heading towards the subway, home.  We stopped at what looked like a nice wine shop and bought a couple bottles of wine, thinking ourselves sophisticated and enjoying a rare opportunity to shop outside of the East Village.  I was making pretty good tax-free money at the time as a performing artist.

We walked with our bag of wine into the park, opting to walk through the park rather than rush straight to the subway to head home.  As we approached Strawberry Fields we noticed there were more and more "hippies", or many dressed as such, gradually accumulating.  Tie-dye t-shirts, jeans, jean patches, hats, flowers, guitars, notebooks filled with poems...  You get the idea.  Then it occurred to us, of course, George Harrison had passed away. Strawberry Fields.  Brilliant.  What luck.

There were people everywhere, milling about and sharing stories about their love for The Beatles.  It was genuinely touching and pleasant.  I remembered the news reports of this area after John Lennon had been killed. There were thousands and thousands of people sitting vigil for days after his death across the street in the park, long before it was known as Strawberry Fields.  Many of those people seemed to have returned.  My girlfriend and I were among the younger people there.  Well, she was young.  I was more than a decade older than her and was much closer to everybody else's age there, though still in my early 30's.

People were playing Beatles songs in unison, happily expressing their love for the group, and George, with an outpouring of shared love and affection.  We opened our bottles of wine and drank and shared and chatted and watched.  There were those who could not contain their grief, of course. There are always those who do not understand that another's death is not directed at them.  Those that will always answer the question of "How you doing?" with a dramatically detailed answer cataloging a malady of theirs, either real or imagined.  At those we privately giggled, unable to contain our cynicism and budding New York snarkiness.

In time we moved on.  We enjoyed a further walk into and through the park.  We happened upon a guy who had set up quite a telescope rig.  I don't know enough about these things to pretend that I could estimate this thing's cost, but it was clearly a lot.  It had a computer associated with it so that it could track the objects as they moved through the cosmos and he could enter a different location so that the telescope would mechanically move to that point in the sky and those gathered there could then enjoy an entirely different celestial event.

Keep in mind this was from the interior of Central Park.  When you looked up with the naked eye you could maybe see about 25 stars in the sky, a small handful of which were planets.  It defied the senses that this device could penetrate through the murk so well as to plainly and clearly see things such as the moons of Saturn and Jupiter.  But that's what we got to see, and much more.  All of that, and of course, George Harrison's soul as it ascended into and across the universe, we told ourselves.

We stood there waiting or next turn to peer into the eyepiece, one at a time, wine warming our bellies and granting us each the gentle swoon of wonder.  We looked and we looked, marveling at all there was to marvel at.  The night quieted and chilled around us, the park began to empty.  The wine was wearing off, taking The Beatles with it.  We tightened our jackets and scarves and stepped from foot to foot.  Finally, we bored of the solar system, without ever knowing it, we wandered off into an unshared future.