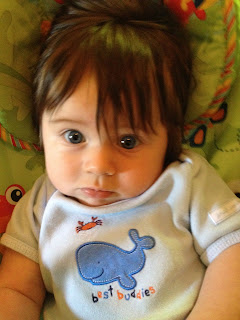 I'm not so sure about being a day-care daddy.  It's not that I don't enjoy the sense of bonding that's occurring between Rhys and I.  It's more that I had perhaps harbored a few misconceptions about what it might be like.  I have been trying to do it very well, because I very much want to and because I fear that people might have suspected that I couldn't, or wouldn't.   I'm not sure why I felt this way.  I suppose that living in a "nay-sayer" environment eventually takes its toll.

I have allowed people to subtly suggest that I'm just a fuck-about whenever it comes to anything that matters.  It is part of a persona I've cultivated, then allowed it to be developed and augmented by others, and then almost lost control of.  The persona's not entirely accurate, of course, but it taught me a few valuable lessons.  It's not entirely inaccurate either.  That's the part that I've struggled with.

Nobody wants to feel incapable, they want to feel that they have choices and undiscovered talents.  Pursuing one can sometimes eliminate or obscure the other.

A regular reader of this blog, one that I'm not quite certain if I know or not, wrote to me through the comments section a few days ago, asking me not to publish the comment as it was a private message intended for me.  I tried to write back but could not locate an email address for the commenter.  I won't go into details - as it is not my prerogative to do so - but the message conveyed through personal accounting that I should be careful, that it might be far too easy to find myself in a situation where this is all that I'm doing and that I could find that I like it far less than I might have once thought.  The impression the person gave was that it is far too easy to let time slip by and before you realize it any hopes and dreams you might have had for yourself can be lost.

It has given me a glimpse into something, but only a glimpse.  I've formulated no conclusions yet.  I'm still trying to let my talents and choices work together.

I am already prepared to demand equality though, and it only took me a week or two.  I think it's time that women realized that what a man does, when he chooses to stay home and take care of his child, is just as important and difficult as what a woman does when she goes off to work every day.  Being a house-husband is several full time jobs.

Ok, I am kidding a bit, of course.  We all know that women should be working and they shouldn't be stopped from voting, or even discouraged most of the time.  Times have changed, and if all of you working mothers out there can't respect that a man stays home to fart and raise your child then you are just troglodytes trapped in a soon to be frowned upon past.  Go back into your caves...!!!  The next time that you come home and grunt that you're hungry, ripping open a beer and reading the paper with your feet up, take a good look around and ask yourself what that smell is.