The apocalypse will start in LA 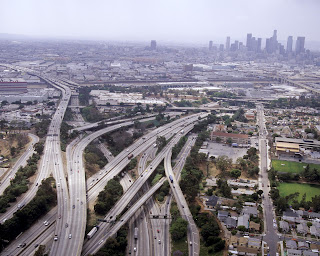 Nothing much to report here, a lazy Sunday.  By lazy I mean sleepy.  I was up late last night, by our new family standards and timetables.  I must have been up until well after 11pm.  It was a crazy night re-watching old movies.

I wonder if any of my old New York friends are still up and doing drugs.  I bet some of them are.  I wish I had a Google Raver-Cam where I could just log on and watch their sordid dealings on a Sunday morning, or Monday. Tawdry stuff, I'm sure.  No, I'm just kidding.  The real ravers are in LA this morning, everybody knows that.

Yesterday I was joking with Rachel about the differences in people from various areas and how they present travel to others.  There are those that never travel.  They make up a large portion of the population of the United States.  They do not own passports.  They approach the very idea of international travel with suspicion and vague derision.  The most exotic place that they believe it is safe to go is Honolulu.  They will get travelers checks to do so.

The people from LA discuss going to New York as an indication that they are the sort of person that is needed in NYC as well as at home on the west coast, practically one who possesses dual citizenship.  They will regale their friends with stories of New York restaurants, neighborhoods, bars and night clubs.  Taxi rides.  West coasters are thrilled to take taxis everywhere, quite a novelty for them I guess.  To pay to ride in somebody else's car... no matter how filthy, smelly and unpleasant it can be they will retell the story of "hopping in a taxi" to go here or there.  Notice it, it is always a component of their story telling.  Unless, of course, they were originally from New York.   The only type of person that is tolerable from LA is one who previously lived in NY and moved to the west coast for work.  For them I have pity, and they are invariably apologetic about LA in their own way, which helps curb some of the discomfort of chatting with them.  Be suspicious of anybody who wants to move to LA.

People from New York will discuss going anywhere else in the world as their badge of pride.  To not travel internationally every now and again means that you are some sort of slave to capitalism, a cog in the wheel, or worse: a republican.  When they do mention going to Los Angeles it is always qualified with "I had to" and "for work."  It is not a place to which they refer going in glowing terms, unless they've never been elsewhere, then they will subtly gush about getting sushi at Mori or Asanebo.  It is practically the only thing that a New Yorker will mention about LA, getting sushi.  As Woody Allen once famously said, "I don't want to move to a city where the only cultural advantage is being able to take a right turn on a red light."  Los Angeles is for people who believe that television shows are a modern form of art.  All of them have a concept for a script.  You can not rent an apartment in LA without having a treatment of a project you're currently working on and would also like to act in and direct.  It is the law.

No, I only kid.  LA has more art museums than any other city in the US.  Without them who would supply the great casinos in Vegas with their many treasures....