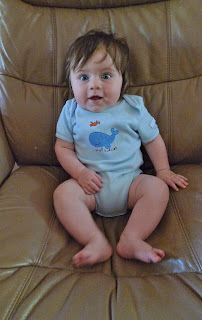 I've been watching Rhys more, as any of you who've been reading this blog already know.  I've heard tales of "full" diapers but I thought that they were mostly myth, exaggeration.  Nope.  Not at all an overstatement.

Shorlty after Rachel left this morning, I had just picked the little boy up, I got a whiff that something was "off." I took him up to his room, where the changing table is, proud to be a father.  When I undid the buttons on his washable diapers I saw something terrible.  No sooner had I seen it did he have two hands in it, smearing it.  Red Alert.  Red ALERT!!!  Fuck, fuck, fuck....  The word "Hepatitis" kept going through my mind.  Help me Pamela Anderson, help me.  I grabbed his little arms and held them in one of my hands, reaching for the wet wipes with the other.  All the while he thinks we're playing and he's pulling his legs up, as he does.  This had the effect of spreading feces all over every available surface that was from the waist down.

Spreading the stuff also spreads the smell, by the way.

My focus was locked on not letting any of it make its way towards his face.  Other than his hands, which was an obvious misstep, I was doing pretty well so far.  It all existed from the waist downwards, but was spreading fast.  I got his hands clean.  I used about three wet wipes on each hand, just to be sure.  Getting between each of his little fingers, something I've never done.  I've looked at his fingers, and held his little hands, but I've never traced each of the fingers this way.  I had hoped that this revelation would be more magical, and less fecal.

Then came the hard part.  If you've never tried to keep a child's hands away from his own feces while you are cleaning the stuff up then I suggest you try it.  It should be a televised competition.   One mistake goes a long way.

First, I got the diaper away from his body.  There was still a wealthy accumulation of the stuff in there.  That immediately created another problem, there was lots more still, and now there was no barrier between it and the rest of the world, where all of it seemed to want to be.  I grabbed another cloth diaper from the stack of "dirty" ones, one that looked clean, and cleaned more of him up as best as I could, smearing and wiping the stuff as I went.  After that I got to work with the wet wipes, using about another ten of them, cleaning and re-cleaning, checking, looking, verifying.

All the while he seemed to be having fun.  I was not.  I rushed to the bathroom to wash my hands and arms.  If you've never seen the shower scenes of the movie "Silkwood" then it's difficult to explain what was really needed in this instance.  I felt like I would never be feces-free again.

Then I got out a throwaway diaper and put that on him, even if it was temporary, it was going to help my peace of mind.  This is when my real troubles started.

Now, I'm not sure how any of you feel about having large quantities of feces in the same room with you but I am against it.  So, I started to put one of his "onesies" on him.  I was perhaps rushing a little bit.  I could tell because he started making disgruntled noises.  This is somewhat normal so I let it go, focusing on a plan of action to permanently remove it from the premises.  Once I had him dressed I put him in his crib, rushed to wash my hands another time before putting a "binky" in his mouth, reminding myself of the dangers of that putrid stuff.

There were no binkies to be found.  Not in his crib, not near the bed we have in his room, not in the bassinet we have in our bedroom, not on the nightstand, not anywhere.  We have about 100 of them in this house, I promise.  There were none visible.  His noises of dissatisfaction were building in intensity, slowly.  I finally found a brand new one that I ripped open and tried to get him to take.  It was dry and brought him no solace.  Even though I had been told not to moisten it with my own saliva (ph imbalance, cavities, something) I did so anyway and tried to get him to take it again.  His noises turned to a full cry.

I picked him up out of the crib and held him, rocking up and down, hoping that this would help. It eventually did.  I put him back in the crib hoping that he would stay calm, grabbed the little garbage can we keep near his changing table, and rushed off downstairs with it, emptying it in the larger garbage can we keep near the kitchen. One feces filled wet wipe fell to the floor.  I picked it up and started upstairs as his cries reached full blast again.

I ran straight to the bathroom and washed my hands and arms again, Silkwood style.

Back to the bedroom only to find him rolled over in his crib, crying into the mattress.  I picked him up and held him again.  I felt like there were shit particles everywhere, spreading fast.  The room stunk of it all.  It's not like the adult version of the stuff.  It seems to be made of an ectoplasmic base that seeks to inhabit any space other than the one it is currently in.  I consoled him again.  He's really starting to see me as a comfort giver.  He buries his head in my chest when he's upset, and he falls asleep easily when I'm holding him.  It is a wonderful feeling.  So, I got him to calm down and then I went back to war with the waste.

I could have thought this next part through a little bit better.  I started to wash the muck off of the cloth diapers in the sink.  There was far too much of it, it was far too congealed and resistant to water, and the drain in the sink was far too insufficient to handle the vast quantity of it all.  I was left with crap up to my elbows and a sink full of the stuff that did not want to drain, chunks of it were accumulated around the drain, taunting me.  Mired to the elbow, the boy started to cry again.  Crap.

I washed my arms again, this time vowing to not deal with the excrement any further until the boy was either asleep or happy.  It took a couple minutes to wash this time.  It's one thing to imagine that you have dung on you somewhere, it's another to have smears of visual verification.  I washed, then I washed again, then I washed again, putting the drying towel in the dirty clothes so that I wouldn't have to worry about that later either.  I picked the boy up and thought that I felt something in his diaper.  I checked.  Thank the doo-doo gods there was nothing there.

I walked with him for 10 minutes, holding him in my arms, his head fell into my chest tellingly.  I walked with him another few minutes to make sure that he was definitely asleep, then put him in his crib with his dehydrated binky, which he seemed to finally accept as an appropriate object of succor.

I looked around the room and felt like there was ordure everywhere.  I knew it was mostly in my mind, but it is sticky stuff to shake off.  I got in the shower and washed all places except my face and genitals, still afraid that the stuff was out to get me.

I got out of the shower.  Fuck.  The towel was gone, of course.  In my cleaning fever I expelled it from the realm of possibilities.  A quick, wet, naked walk to the bedroom where I dried off using a dirty t-shirt.  Counter-productive?  Perhaps, but still better than the alternative.  I grabbed a towel, went back to the bathroom, took another shower, this time covering all potentially desecrated territories.  I vigorously washed my hair, making sure to scratch the scalp, knowing that the shampoo and the hair would work together to clean under the fingernails.

I got out of the shower and there were still diapers on the floor of the bathroom near the sink, and the sink was still fouled.  I started the whole process over, this time with gloves on.

Start to finish, approx. 30 minutes.  Victory.  Now it's time to give the boy a full bath.