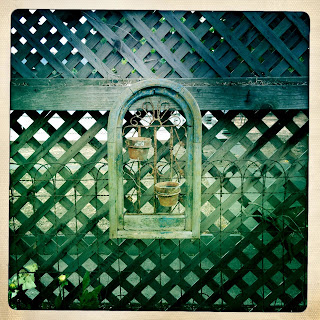 Time flies.  The weeks just keep cruising past.  I count time passing in weekends, in Saturdays and Sundays.  Two days spent cautiously with Rachel then back into another set of nameless weekdays.  I've stopped looking at my calendar.  My phone is mainly used to keep track of Rhys' feeding schedule.

During the weekdays there is a routine that repeats.  At first I had thought that time went past somewhat slowly.  Now, the days just disappear.  Time evaporates, falling upwards into the sun.  When Rachel asks me what I did during the day it is impossible to relay.  Lots.  Lots, I would say.  But the day is filled with mainly miniature details, events that do not qualify as events, impossible to catalog, or from which to draw narrative.  Pleasant enough in the doing but mundane in the re-telling, taking almost as long to tell as to do.  I feel like a post-war housewife, frustrated that nobody recognizes the struggles of my day, the minuscule victories, the minute difficulties bested.

Well, we went for a stroller walk with Barkley and then I played Rhys some songs on the piano.  He pooped his pants and then took a nap.  I fed him when he woke up and we did all of those things again, but not in that order.

What a drag it is getting old.

"Kids are different today,"
I hear ev'ry mother say
Mother needs something today to calm her down
And though she's not really ill
There's a little yellow pill
She goes running for the shelter of her mother's little helper
And it helps her on her way, gets her through her busy day.

"Things are different today,"
I hear ev'ry mother say
"Cooking fresh food for a husband's just a drag"
So she buys an instant cake and she finds a frozen steak
And goes running for the shelter of her mother's little helper
And to help her on her way, get her through her busy day.

Doctor, please, some more of these
Outside the door, she took four more
What a drag it is getting old.

"Men just aren't the same today,"
I hear ev'ry mother say
"They just don't appreciate that you get tired
They're so hard to satisfy. You can tranquilize your mind."
So go running for the shelter of her mother's little helper
And for help you through the night, help to minimize your plight.

Doctor, please, some more of these
Outside the door, she took four more
What a drag it is getting old.

"Life's just much too hard today,"
I hear ev'ry mother say,
"The pursuit of happiness just seems a bore."
And if you take more of those, you will get an overdose
No more running for the shelter of a mother's little helper
They just helped you on your way through your busy dying day.