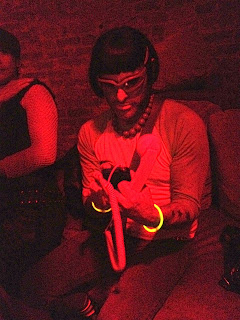 For anybody who knows this "scene" and might find this anecdotal snippet humorous:

Last Thursday night I went out to hear a dj play, an old friend from England.  It was nice to see him and the night was fun, he played very well.  He played a lot of music that I liked, to the point that I was asking what some of the tracks were, almost a faux pas in that community.

It is called "trainspotting" and can annoy the victim of it.  But we are friends and it can also be a sign of respect, and of course, genuine interest.

At one point towards the end of the night a young woman came into the dj booth and was showing her enthusiasm for the dj with a lot of nodding, imbibing, and the occasional screech of eagerness.  I believe she might have been Australian.  I was committed to not being certain.

She leaned towards me, "Mate, these people just don't know what good British music is."

"This is Carl Craig."

"Oh, I thought you said British music.  This track, this music, is American...  I didn't know Manchester was a neighborhood in London."

"What?  Manchester's not in London.

"I don't know what you're on about, mate, Sasha's British.  This is the finest in British music."

"I see.  It's too bad San Francisco just doesn't have any clue what good music is.  All of those people on the dance floor could be having fun right now.  It's a terrible shame."

I walked away, knowing it was better to do so than to pursue the conversation any further.

Maybe I'm just too old to be going to nightclubs any more.  I don't know.  I can hardly stand talking to most of the people there and I'm quite confident they feel the same about me.

The guy pictured above was a retro-raver.  He had his rave accoutrements in place and was furiously networking with his iPhone and accompanying headset.  It's too bad the place was so dark, a good picture would have covered a thousand words, or so.

I used to be a freelance leader in the stalwart opposition to taking any pictures in a nightclub.