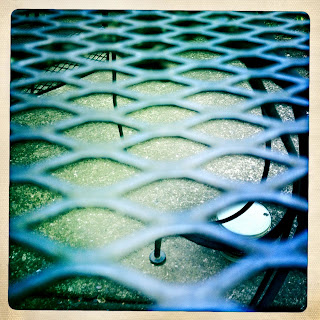 "I don't believe in evil, I believe only in horror.  In nature there is no evil, only an abundance of horror: the plagues and the blights and the ants and the maggots."  - Isak Dinesen

Last night I awoke to get a glass of water.  I walked to the kitchen and poured one.  As I stood there drinking it in the dark I felt little monsters crawling up my legs.  I turned on the lights.  There were thousands of them.  Ants.  Everywhere.

I turned off the lights and went back to bed, telling myself that there was nothing I could do, that I would take care of it in the morning.  When I woke up in the morning they were all gone.  I thought that I had suffered a bout of night craziness, or early onset menopause, or that maybe it was only a strange dream.

I asked Rachel.  She wanted to know how bad it was downstairs.  I told her that they were all gone.  She could hardly believe me.  Only a few minutes before she had removed a bag of recycling from the floor, putting it outside in the bin, then washed the jar of honey off that had been left out, putting it in the refrigerator.  That was it.

I had expected to look at the jar of honey in the refrigerator and see them trapped in the sticky stuff like miniature dinosaurs trapped in amber.  But there were none.  I suppose they were after whatever remainder was on the outside.  I had hoped to eat some of them, to celebrate our victory over them, crunching hundreds of miniature mandibles in my teeth at once.  I imagined their horror at such a thing.  Godzilla, I.

They have colonized every land mass on earth.  It was only a matter of time before they came after our honey jar.  I had somehow always known this.

Thousands of them that had been deployed to retrieve whatever trash they were after, and to bring back as much of our kingdom's honey as possible, were then recalled back home to the mound to enjoy their spoils.  To make merry with the byproduct of our sweet nectar.  They will be reveling all day today, I'm sure of it.  I can almost hear the celebratory sound of miniature gunfire in the distance, the rat-a-tat-tat of semi-antomatics.

I just found one on my desk.  Rachel found a line of them upstairs just now as I write this.  Perhaps there are more reconnaissance missions that we have yet to discover, penetrating deeper behind enemy lines, trying to flank us.

This is the second time they have made their way into our place. We will have to be more proactive in the future. Who knows what sleeper cells they have left in here to reek havoc once the place goes dark and they can have their way with our sweets, produce and refuse.  They are black ants so I'm not as worried as I would be if they were red.  Even so, it is unsettling to know that an army has made its way past your front lines and is ransacking your kitchen.

Okay, I spoke too soon.  Rachel just discovered a line of ants that leads all the way upstairs.  They have huddled together in a corner of the stairwell where we can not reach them.  I have sprayed all of the lines of ants that lead to the clustered group but I have no way of getting up to them.  I feel like Adolf Eichman, but what is one to do?  It really is an "us or them" situation.  We will need to contact the Homeowners Association and seek a Final Solution as these ants are coming in from the outside.  They are what is known as outside agitators.

One day I will be asked to help some ants with a broken down car on the streets of Argentina where I will be abducted and then brought back to the ant mound for justice.  I don't think those little fuckers would ever be able to hang me but who knows... perhaps they have devised an execution far worse than hanging.

Rachel is understandably upset.  There is an infant in the house.  She can not accept ant infestation in any ongoing manner.  Ants are in the same order as wasps and bees, making them a potentially formidable opponent.  I must find the mound outside and poison the well at the spring, cutting of their supply lines.  I know that most solutions are only temporary, that it is very difficult to eliminate a colony, even for the experts, but we must do what we can to persuade them to scavenge elsewhere.

They are often portrayed as hard workers yet there were hundreds that somehow found the time to frolic in our kitchen all night.  I refuse to believe they were all working.  Certainly there must have been sluggards among them.  They were wandering around on the floor as if it was just a big outdoor rave.

Rachel hates me right now for reasons I don't fully understand.  We tried to talk last night and it was as if every thing I said only exacerbated the situation.  Now there is the ant issue.  Somehow I will be blamed.  Perhaps the ants were a punishment for the hot dogs, sent in from places unknown to terrorize me at night.

Last night for dinner I ate four hot dogs and a soft boiled egg.  No buns, just dogs on a plate with mustard.  I didn't feel like preparing anything and the hot dogs seemed the easiest.  They were, but then I felt guilty after eating them, worse than guilty.  I worried about the effect they would have on my digestive track.  The timing was bad for my relationship.  I wrote about infant feces the other day so I won't go into any detail about the possible effect that those hot dogs will have.  I fear that this site may become too scatological.  Anuses can have a certain charm but one must be careful with them.  They can lose their charm very quickly, and unexpectedly.