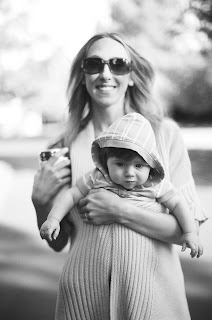 Another day.  Rachel left to work late and had already put Rhys back to sleep for his morning nap. The kid sure does sleep a lot.  I had hoped to take Rhys to the day-care woman today, wanting to get some things done, things that I did not get done yesterday.  We'll see, I guess.

One of the things that I did get done.... I drove into Marin to pick up some processed black-and-white film.  Marin does not bother me as much now that I am no longer involved in the service industry there.  The entire SF bay area is beautiful if you can avoid the people.  Not all of the people, of course, just a fraction of them.  It is about 10%.

As I was driving home I was listening to KPFA 94.1, listener sponsored radio out of Berkeley.  Being interviewed was the editor of an upcoming 14 volume set on Rosa Luxemburg, her writings as well as discussion on her life and accomplishments.  The most interesting part of the program was when they were discussing her masterwork, "The Accumulation of Capital."  They briefly went into her criticisms of capitalism and what the effect of surplus labor value has on a system that is limited by national borders, the effect that the accumulation of capital has on others, both within and beyond those national borders.  Within just a few minutes the expansion of capitalism into third-world, or developing, nations suddenly became clearer.  Or, perhaps it only reminded me of things I've studied in the past.  I don't know, it sounded exciting and new to me at the time.  Marxism often does.

I wondered how many involved in the Occupy movement were familiar with her writings.  To be honest, before yesterday, I only knew that she was a socialist, nothing more.

The speaker told great stories about her philosophical involvement with Lenin, her imprisonment, her difficulties with Lenin trying to subsume her socialist organization while she was in prison, then her murder shortly following her release.  Pretty fascinating stuff, considering the outcome of the first World War and the effect of globalization and capitalism on the international marketplace.  The socialists seemed to be fighting against the very thing that is nearly hopeless to now, predicting beyond 100 years what the more damaging effects of the capitalist model would be, the ever-increasing conduits of power and capital.  The differences that she had with the the mainstream socialists came down in some ways to her belief that the masses need not necessarily be educated for a socialist revolution to occur.  She believed education to possibly even be an impediment.  She was considered far too radical by many for holding this view.

Only one street away from where I used to live in the East Village was the previous home of Emma Goldman.  I had thought that I had written about it on this site before but a search revealed nothing, somewhat appropriately, she was an anarchist.  No wait, those are the nihilists I'm thinking of... the anarchists believe in something, not nothing.  Eleanor Roosevelt lived just a few doors down from Emma Goldman, though at different times.  I wrote about it here, sort of.  Eleanor's place was a shit-hole compared to Emma's.

As I was listening to the discussion on the radio I wondered about the non-capitalist democratic systems, and the democratic systems that support vast socialist programs.  Have they proven to be preferable in any substantial ways, I wondered.  The actual condition or qualifications of any of those states is always hotly debatable.  It is difficult to even discuss such things with some people here.  We are told that any society that rejects American intervention is dangerous.  Then we are alternately told that socialist programs mostly function in Scandinavian countries because of the unanimity of the populations there.  But that can't always be right, the falseness of such a claim seems to be apparent.

I will have to do some more research on the global state of socialism and socialist programs.  It seems there must be much more to the conversation that we simply aren't hearing in the public discourse.  Is that just me being naive?  I've mentioned the concept of totalitarian democracy before here on this site.  Perhaps that explains it all, that the suppression of dissent is not only vital to either system but instead is its hallmark.  If your vote no longer matters then dissent can mainly be expressed in capitalism by the reluctance to purchase, to participate.  Then all that would be required to remain in power is to keep the people poor.  Their dissent will never even be noticed as such.  It is a self-fulfilling system.  How can the voices of the poor truly matter when they aren't even able to buy?  Control the cost of all things, always with a shift away from accessibility, and power will continue to rise and accumulate exclusively at the top.

The echoes of the Occupy movement ring through all of this, of course.  Their dissent was stifled openly by the media's attitude that they have little right to criticize a system that they're not participating in.

This popular criticism perhaps proves to be even more telling than the movement.

"Freedom is always the freedom of dissenters." - Rosa Luxemburg (attributed on the internet)