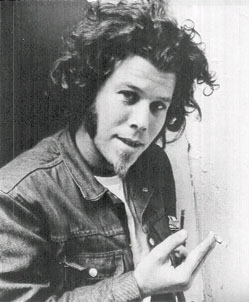 I'm in a similar boat as Ol' Selavy.  I'm getting in trouble for writing fictions.  Please, I beg of everybody that reads here.... Either I am entirely making stuff up, or am inflating one small part of my day into something larger, or I'm taking something that I've read and pretending to have feelings about it, or I'm fictionalizing part of my day to make life more amusing for me.  It's all just a joke.  I am just pretending to feel the way that I do.  I'm laughing along with all of it.

If you read about yourself on this site and you wonder at my harsh treatment of our experiences it is only for the sake of humor.  I promise.  The author of this site apologizes.

I've eaten far too much acid in my life, it's what happens to the mind, it needs perpetual distortions, for entertainment.  To make things seem real again they must be modifiable.

So, I was listening to Tom Waits tonight and reading through some online articles about him when I came across this link.    If you are an avid fan of Waits then read through the rather terse album reviews found there.  They will enrage and excite you, I hope.  He has some good points about Waits' weaknesses but he fails to really get the point, I think.  Tom Waits is also writing fictions, like Bukowski.  We are not meant to believe that every tale is true.  They could not possibly be.  He is relaying the essences of experiences.  He's also parodying himself as he goes.  All of it is done with a wink, I think, even the self-mocking.

I won't go through and rebuff each album's review, point by sparse point, but I think the main objection I have is that Waits gives us enough indication that he is kidding along the way as to be forgivable.  He knows that what he's making isn't quite as authentic as it is meant to sound.  It's half a joke, half not - from today, from yesterday.  He's a little like Otis, the town drunk, from The Andy Griffith Show.  The actor that plays "Otis" I mean.

It's why you will mostly see black and white pictures of Waits from the 70's.  His image began as a fiction, becoming increasingly colorful only as he discarded the costume of the past.

His crime, to me, doesn't seem to be that he lacks "the intellect or self-discipline his talent deserved"* but only that he is laughing a little bit too much at himself as he goes.  Sure, Frank Zappa was supposed to be very talented, people tell me all of the time, as if they're trying to convince me so that they can rest at ease with their convictions if I don't put up a fight about it.  But knowing that he's talented never makes me want to listen to his music, and it's never stopped me from listening to Captain Beefheart.  Similar artists, of the same time period, that stand miles apart to me.  One I love, the other I let other people love.  One reduced his talent to a series of jokes, the other I freely laugh along with, etc.

Waits functions in a similar fashion, though occasionally accomplishing both states.  I listen through the self-mocking pieces, granting him his drunken blunders and whims, discarding the bathetic, to get to the pieces that possess genuine sentiment and true beauty.  Even when he undercuts his sentiment with internal derision he still pulls off moments that are well worth the price of admission.  Sometimes he just seems like a kid that has convinced almost everybody but himself, and he's not going to rest until that remaining doubter believes.