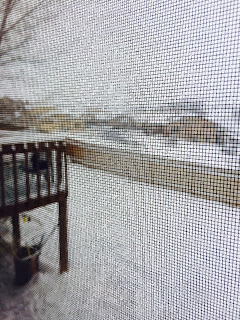 (Looking out from my father's house)

Promise me baby you won't let them find us…

Well, I tried to stop writing. My efforts were not a success. I'm like a dog that chases cars, incurable. I will not be convinced otherwise. Each day I wake up and I am something. I have some impulse, and then I don't know what else to do with myself. I am alone and trying to be quiet. Writing allows for that. It is some private strangeness.

A few days ago CS said something along the lines of: Pleasure leads to obsession and obsession to a dulling of the senses. That's what happened to me, I think. My senses have become dulled. When I look back I see that too many of my pleasures were artificially derived, then they became something else. Too many, too often. Now, I just miss them.

I am searching for new, simple pleasures. Just little things that make me happy. They're out there. I can feel it. But new interests must be developed, just to get to them. It requires time, everything does. I have ordered an old used film camera. We'll see about that.

I spoke about my waning love of music the other day because that was one pleasure that became an obsession, one that I do not believe I can go back to, not in that way. There is no entrance left for me to get back in. The bouncers have sealed me out. Music is a one-way device for turning young people into my generation, or worse.

I let a friend borrow my Martin guitar because the nerves in my left hand were damaged. I suppose I should get that back from him. The hand has recovered enough and I could probably use something else in life to distract me. There is nothing like playing an acoustic guitar while lying in bed, or sitting peacefully in a chair. 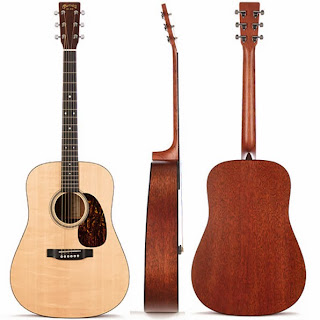 It's a nice guitar, a Martin, and a much better one than I deserve based on my playing ability. But I am middle-aged and can afford things I don't deserve, things that would make a younger person sway with desire. I bought it for myself as a gift, after having gotten a job at Apple, many years ago. I had a dj'ing gig in Mexico and then Rachel and I took all the money from the gig and some of hers down to a big guitar store, one just off of Time's Square, and brought it home on the subway to her place in Greenwich Village.

I played 'til my fingers were swollen and sore. I could hardly touch her without some pain.

It's been over a year now since I've played the guitar at all, or well. I guess it's time to start again, to re-learn, to wear my fingertips down and build them back with callouses. Little Rhys has fallen in love with my electric guitar, the Fender Stratocaster. He makes me pull it out of its case so that he can try to swallow the pick. I will hold it upright with my left hand in the position of a chord, usually a D or a G. He will run the pick back and forth across the strings, laughing, smiling, and waiting for the sound to come. He sees me do it, then he tries, then he gets bored. He will just start smacking at the strings with his hands, happy to be hitting something, squealing with delight.

I've practiced discipline slowly, little bits here and there over the years. I go to the gym and write every morning… that is something.

It's funny, hearing some people tell the story of my life, their version of it, how out-of-control I am, or have been. People will think anything they wish or need to, then it becomes a version of the truth. Belief makes it so - just look there at the testament - and that little moment of evidence. All that is required is for the story to seem even partially plausible. The mind fills in the blanks with imaginary concrete and then the structure is complete, it rises. After that, even honesty seems uncertain. It has no place left to assist in the construction. It's part of the beauty, the magic, the terror, and the lie of life. Somebody, somewhere is always casting spells. If not for you, then often about you.